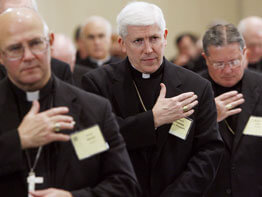 BALTIMORE – In what several bishops called “a watershed moment” for the U.S. Conference of Catholic Bishops, the full body of bishops overwhelmingly approved a document intended to help Catholic voters form their consciences on a variety of issues before the 2008 elections.

“Forming Consciences for Faithful Citizenship: A Call to Political Responsibility From the Catholic Bishops of the United States” was approved on a 221-4 vote Nov. 14, the last public day of the Nov. 12-15 USCCB fall general assembly in Baltimore.

The bishops also endorsed a shorter document, designed as a parish bulletin insert, by a 221-1 vote.
Prepared by a task force made up of the chairmen of seven USCCB committees, the document underwent more than a dozen drafts and was still heavily amended during the meeting and immediately before the Nov. 14 vote.

The longer document rejects politics based on “powerful interests, partisan attacks, sound bites and media hype” and calls instead for “a different kind of political engagement.”

That engagement must be “shaped by the moral convictions of well-formed consciences and focused on the dignity of every human being, the pursuit of the common good and the protection of the weak and vulnerable,” it says.

Bishop Nicholas DiMarzio of Brooklyn, N.Y., introduced the documents Nov. 12, saying that he spoke not only as chairman of the bishops’ Committee on Domestic Policy but as “the leader of an unprecedented, extensive and some would say endless consultation” among seven USCCB committees.

“This document is a summary of Catholic teaching; it is not a voter guide,” Bishop DiMarzio said shortly before the Nov. 14 vote. “It calls us as bishops to help form consciences for political life, not tell people how to vote.”

But he also said “Faithful Citizenship” clearly distinguishes between “intrinsic evils like abortion and racism that can never be supported and the related, but different, moral obligation to serve ‘the least of these,’ seek justice and pursue peace.”

In the longer document, the bishops admit that “Catholics may feel politically disenfranchised, sensing that no party and too few candidates fully share the church’s comprehensive commitment to the dignity of the human person.”

“As Catholics, we should be guided more by our moral convictions than by our attachment to a political party or interest group,” the document says. “When necessary, our participation should help transform the party to which we belong; we should not let the party transform us in such a way that we neglect or deny fundamental moral truths.”

It is part of a series of documents that have been issued before every presidential election for more than 30 years.

But the 2007 version underwent a wider consultation at the committee level and is the first to come before the full body of bishops. In past years, the documents were approved by the Administrative Committee, made up of the executive officers of the USCCB, elected committee chairmen and elected regional representatives.

The panel that drafted this document was made up of the chairmen of seven USCCB committees – domestic policy, international policy, pro-life activities, communications, doctrine, education and migration.

The joint committee accepted 26 pages of amendments to the document at the start of the fall meeting and rejected 10 other pages of proposed amendments, Bishop DiMarzio said.

The document does not address a topic raised during the 2004 presidential campaign – giving Communion to Catholic politicians who support keeping abortion legal. Archbishop Raymond L. Burke of St. Louis already has said he would not give Communion to former New York Mayor Rudy Giuliani, who is, according to recent polls, the leading Republican presidential candidate.

In response to a question during discussion on the document, Bishop DiMarzio said the Communion issue would not be addressed because the conference had dealt with it earlier in two other documents and because “Faithful Citizenship” is “directed at Catholic voters, not Catholic politicians.”