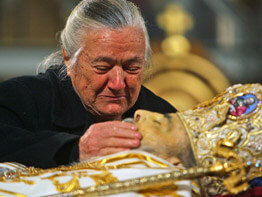 VATICAN CITY – The Catholic bishops of Greece offered their condolences to the country’s Orthodox majority as they mourned the death of Archbishop Christodoulos of Athens.

The primate of the Greek Orthodox Church, 69, died Jan. 28 in Athens after a long struggle with intestinal and liver cancer.

Under the leadership of Archbishop Christodoulos, who was elected in 1998 to lead the Greek Orthodox Church, relations between Catholics and Greek Orthodox improved remarkably.

The country’s Catholic bishops called his death “a great loss for the Greek Orthodox Church and for the ecumenical movement,” reported L’Osservatore Romano, the Vatican newspaper.

The statement issued by the Catholic bishops’ conference of Greece called Archbishop Christodoulos a “great pastor” and an ardent supporter of Christian unity.

“We pray that the Holy Spirit will raise up a guide who is just as strong and profound,” they said.

The archbishop’s funeral was scheduled for Jan. 31 in Athens. The Greek Orthodox Synod of Bishops must meet within 30 days to elect a successor for Archbishop Christodoulos.

Pope Benedict XVI had sent a message to the archbishop in mid-September offering his prayers as the archbishop awaited a liver transplant in the United States.

In June, he had surgery for intestinal cancer, and doctors discovered he also suffered from cancer and cirrhosis of the liver. He flew to Miami in mid-August to await a liver transplant, but doctors discovered his cancer had spread to such an extent that the transplant was no longer possible.

He returned to his home in Athens where he died.

In 2001 it was Archbishop Christodoulos who, despite opposition from some Orthodox priests and bishops, hosted Pope John Paul II during the late pontiff’s groundbreaking trip to Athens.

Then, during a December 2006 visit to the Vatican, Archbishop Christodoulos signed a joint declaration with Pope Benedict, pledging “fruitful collaboration,” “dialogue in truth” and joint action to strengthen Christian values in Europe.

In their speeches to each other and in their declaration, the pope and the archbishop acknowledged how far apart their communities had grown over the centuries and how difficult their relations were, even as late as the 1990s.