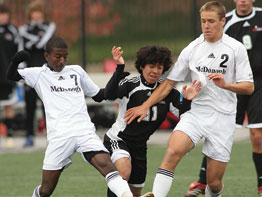 The Calvert Hall College High School, Towson, varsity water polo team is the Eastern Prep School champion for 2007. The Cardinals won all three of their matches in a field of eight teams on Nov. 3-4 at Lawrenceville Prep in New Jersey to win the Prep School Championship for the fourth time in five years.

The Cardinals defeated Episcopal Prep 12-5 in the opening round, Loyola Blakefield 13-7 in the semifinals and Lawrenceville Prep 10-7 in the championship game. Seniors Mike Helou, Arny Warren and Dan Kaun were selected to the 1st Team “All Prep” squad and Mike Helou was the Tournament’s Most Valuable Player.

Next up for the Cards is the Eastern Championships where Calvert Hall hopes to avenge their only loss of the 2007 season with Greenwich High School (7-5). The Cardinals’ record currently stands at 24-1-0 (10-0-0 MIAA).

The Friars, who placed second in the conference behind the Eagles in regular season, finished with a league record of 12-4, 20-5 on the year.

Despite afternoon temps in the high 40s, things heated up on the turf into a hard-fought contest. The quick recap: The Friars could not net a goal despite their hustle and tenacity, losing to McDonogh 3-0.

The Friars were defending champs coming into this title game, defeating the Eagles 1-0 in 2006.
But this year, the team was up and down throughout the season. Hoping to peak just in time for the highly competitive playoffs, the Friars had notched 10 shutouts on the regular season and scored 74 goals to their competition’s 23.

The Friars are an experienced club, rich in talent, but were outmatched by the Eagles on Nov. 10. The Eagles scored the winning goal midway through the second half.