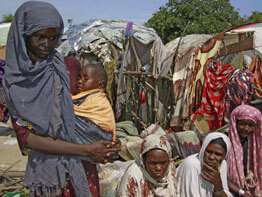 Increasing violence in Somalia’s capital has trapped residents as Catholic and other aid agencies call for an end to the humanitarian catastrophe.

Doctors Without Borders told IRIN, the U.N. news agency, that many residents in Mogadishu have no safe place to go as the conflict between Islamic insurgents and allied Ethiopian-Somali government troops escalates.
The international medical organization said Nov. 7 it was struggling to help residents, but that “some have bled to death as it was too dangerous to move them to hospitals,” IRIN reported.

News of increased tension came after Catholic and other international aid agencies said in a late-October statement that they “cannot respond effectively to the crisis because access and security are deteriorating dramatically at a time when needs are increasing.”

“There is an unfolding humanitarian catastrophe in south-central Somalia,” the agencies said. “Tens of thousands of people are currently fleeing violence in Mogadishu, adding to the up to 335,000 people already needing immediate lifesaving assistance in Mogadishu and the Shabeelle regions.”
The agencies said they were “struggling to deliver assistance through Somali partners in IDP (internally displaced persons) settlement areas,” but were constrained by “harassment, intimidation, roadside bombs and land mines,” as well as security checkpoints.

Somalia has not had an effective government in more than 15 years. Internal violence compounded by famine, disease and poverty has devastated the African country.

In June 2006, the fundamentalist Union of Islamic Courts, which runs a parallel government to the Somali transitional government, gained control of Mogadishu and parts of southern Somalia. Since then, conflicts involving Somali government forces, Islamic insurgents and international peacekeeping forces have intensified.