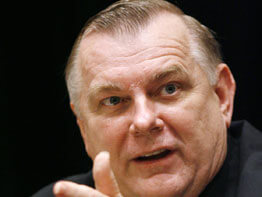 BALTIMORE – Citing an alarming political and partisan stalemate in Washington, a draft statement discussed by the U.S. bishops Nov. 12 again laid out a moral framework for a transition in Iraq.

Noting that the bishops have called for bipartisan action for almost two years, the draft said the current situation in Iraq “remains unacceptable and unsustainable.”

“Our country needs a new direction to reduce the war’s deadly toll and to bring our people together to deal with the conflict’s moral and human dimensions,” said the draft. “Our nation needs a new bipartisan approach to Iraq policy based on honest and civil dialogue.”

The statement focuses on minimizing the loss of human life, immunity for noncombatants, the need to consider what elements of responsible transition are attainable, the consequences of rapid withdrawal from Iraq and the financial and global consequences of continued war and occupation.

The statement also calls for more sustained efforts to collaborate with other nations, including Syria and Iran, as “critically important for bringing some measure of stability to Iraq.”

“Iraq’s future stability is related to the stability of the region,” it says. “This is why U.S. leadership to advance a just peace for Israelis and Palestinians is critical.”

The “dire situation of refugees, internally displaced persons, Christians and other vulnerable minorities” has been neglected, the statement says.

“A staggering 2 million refugees have fled Iraq; another 2 million Iraqis are internally displaced,” it continues. “The U.S. should immediately make more substantial commitments to Iraqi refugees by expanding admissions, eliminating roadblocks to resettlement and supporting countries in the region burdened with war-related refugee populations.”

In a brief discussion of the statement on the floor of the bishops’ meeting, Bishop Michael D. Pfeifer of San Angelo, Texas, suggested adding a reference to the ongoing war in Afghanistan and including a call for bishops to be more proactive both as a conference and individually in pressing the government about how to handle Iraq.

“I believe Congress is searching for leadership” on Iraq, Bishop Pfeifer said, as evidenced by an off-the-record meeting in October of members of Congress and representatives of the bishops’ conference.

He also proposed calling for a national day of prayer and penance, perhaps a Saturday in Advent, focused on Iraq.

At a Nov. 11 workshop on Iraq, Bishop Thomas G. Wenski of Orlando, Fla., chairman of the bishops’ international policy committee, told about 30 bishops that the U.S. church’s goals for transition in Iraq are more modest than they were two years ago.

“We focus now on a morally and politically demanding, but carefully limited goal of responsible transition aimed at addressing the humanitarian crisis in Iraq; the refugee crisis in the region; human rights, especially religious freedom; and the need to rebuild the country,” he said.

He summarized the U.S. Conference of Catholic Bishops’ public efforts on Iraq, ranging from public statements as long ago as 2002, when they warned that waging war against Iraq would not meet the conditions of Catholic teaching for the just use of military force.

Since then, the bishops have made repeated statements as a conference and sent letters to political leaders about how transition from war to peace should be handled.

Most recently, Bishop Wenski sent a Sept. 27 letter to members of Congress, the secretaries of the Defense Department and State Department and the national security adviser, noting “with alarm” the political stalemate about Iraq in Washington. The letter focused on the “dire situation of refugees, internally displaced persons, Christians and other vulnerable minorities in Iraq.”

Bishop Nicholas DiMarzio of Brooklyn, N.Y, chairman of the bishops’ Committee on Domestic Policy, and Cardinal Theodore E. McCarrick, retired archbishop of Washington, visited Turkey, Lebanon, Jordan and Syria in July on a fact-finding mission about the living conditions of the more than 2 million Iraqi refugees in those countries.

In October, USCCB representatives met with more than two dozen members of Congress in an off-the-record meeting to discuss moral questions related to U.S. policy in Iraq.

The meeting included Cardinal McCarrick, Bishop John H. Ricard of Pensacola-Tallahassee, Fla., Bishop Wenski, and two consultants to the bishops’ international policy committee, John Steinbruner of the Center for International and Security Studies at the University of Maryland and Maryann Cusimano Love, a professor of international politics at The Catholic University of America in Washington.

At the workshop Steinbruner said that after the meeting with members of Congress he sensed those elected representatives are more open now to the church’s moral guidance than they were four years ago.

Even among those who hold strong partisan views about continued action in Iraq, Steinbruner said he believes a great many elected leaders “nod their heads in agreement” with the moral considerations raised by the church.

Steinbruner said part of the problem with figuring out what to do militarily and politically in Iraq is “nobody sees the whole.” With press access to the country limited by danger and the fact that many media outlets have withdrawn their in-country reporting staff, Steinbruner said that even counting the civilian death toll is problematic.

Official U.S. and Iraqi sources count about 75,000 civilians killed since the start of the war in 2003, he said. But he believes a tally made by the Johns Hopkins University School of Public Health to be more accurate. More than a year ago that count was 600,000 civilians killed, Steinbruner said.

He explained that governmental sources insist on double media verification of deaths, while Johns Hopkins has relied on local, private reports and statistical sampling from throughout the country. With few members of the news media reporting from anywhere but Baghdad, Steinbruner said it’s impossible to get an accurate count by relying on news reports.

Steinbruner said a solution to the questions of how the U.S. can withdraw from Iraq while leaving a stable, legitimate government in place, and how to end the ongoing humanitarian emergency will require the kind of international coalition that the U.S. government and the American public would find difficult to accept.