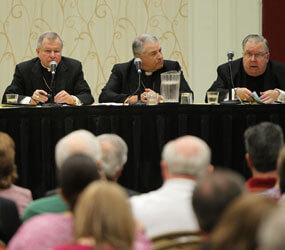 NEW ORLEANS – The bishops who met with Catholic media professionals in New Orleans June 4 said they hoped the gathering would lead to more such dialogues and pledged to report on the session to their fellow bishops.

Archbishop Gregory M. Aymond of New Orleans promised to propose that the bishops’ communications committee draw up a “bill of rights” of sorts outlining both the bishops’ expectations of the Catholic media’s role in the church and what those media organizations expect of the bishops, such as access to information and church officials.

The archbishop was joined on a panel by Archbishop Richard Smith of Edmonton, Alberta, and Bishops Thomas G. Doran of Rockford, Ill., and Ronald P. Herzog of Alexandria. Archbishop Claudio Celli, president of the Pontifical Council for Social Communications, was also in attendance.

The overall theme of the discussion was: “What does it mean to be a faithful Catholic media organization in the 21st century?”

The session, the first of its kind, was on the last day of the 2010 Catholic Media Convention, sponsored by the Catholic Press Association and the Catholic Academy for Communication Arts Professionals. Helen Osman, secretary for communications at the bishops’ conference, opened the dialogue.

The previous day, Auxiliary Bishop Gabino Zavala of Los Angeles, the communications committee chairman, led a preparatory session a day earlier to winnow down questions that the media professionals would present to the bishops, with the help of Chicago facilitator Dominic Perri, a consultant to the U.S. Conference of Catholic Bishops.

The June 4 session – organized at the suggestion of committee members during a January meeting – focused mainly on the independence and autonomy of Catholic publications; the bishop as publisher; building trust between bishop and editor; and financial support of Catholic media.

How bishops respond to questions from the secular press and the difference between Catholic news organizations and diocesan public relations offices were among the issues raised.

The U.S. bishops agreed that the bureaucratic nature of their national conference in Washington often makes it difficult for them to speak with one voice and said they felt someone must be empowered to give an immediate answer to journalists seeking a response on deadline. Otherwise, the credibility of the church suffers, they said.

Questions posed to the bishops from the floor included one about how the Catholic press can report differing church views on an issue when the bishops say one thing and other leaders in the church have a different viewpoint.

Franciscan Father Pat McCloskey, editor of St. Anthony Messenger magazine, used coverage of health care reform as a case in point. He said many Catholic publications were criticized when they reported not just that the bishops had, in the end, rejected the reform over the abortion issue but also reported that the Catholic Health Association supported the reform measure. Can a “faithful” Catholic news organization cover both sides? he asked.

“The answer is yes,” Archbishop Aymond said. A Catholic publication must explore both sides “without bias,” he said. However, rather than just report that one group is saying this and the other is saying that, he continued, the publication also has a duty to report why the church teaches what it teaches on a particular issue.

The archbishop said he thought how the U.S. church handled the health reform debate “was a great tragedy” and cost the church credibility.

Chris Gunty, associate publisher and editor of The Catholic Review, suggested that Catholic media organizations and the bishops need to acknowledge their interdependence,” noting that there is no Catholic paper without a Catholic community and the bishops and priests “need a vehicle” to inform their people.

The bishops agreed with that view of interdependence, with Bishop Herzog adding that bishops need to trust that their editors or communications directors are competent and are not going to undermine them. He added that in a smaller diocese, like his, which does not have the bureaucratic levels of large dioceses, it is easier to have a close relationship with his editor, not to oversee what goes into the paper but to keep communication lines open.

Bryan Cones, managing editor of U.S. Catholic, asked if the church and the Catholic media itself wouldn’t have had more credibility if, rather than the secular press, the diocesan papers and national Catholic publications had been allowed to break the story on the abuse crisis both in 2002, when the U.S. scandal erupted, and now with the current abuse scandal affecting the church in other countries.

If Catholics could have learned all about it in their own papers, Cones suggested they have trusted those papers and not have had to go to the Boston Globe, New York Times and other secular media.

Archbishop Aymond agreed. He said that while the bishops have learned much since 2002 – going from a defensive strategy to transparency and acknowledging “our sin” – “we have hurt ourselves by the way we responded to this through the media” when the scandal erupted, he said.

In other comments during the dialogue, Bishop Doran said, “Diocesan papers are extremely important. … We can’t shortchange the communications apostolate.”

Archbishop Smith said bishops and the media must be collaborators for the sake of the mission of the church – evangelization. He added he would “share the fruits” of the dialogue with his brother bishops in Canada.

At the beginning of the session, facilitator Perri said he hoped the bishops would leave with a greater appreciation of the “tremendous diversity” of today’s Catholic media and that the journalists present would have a better understanding of what the bishops face.