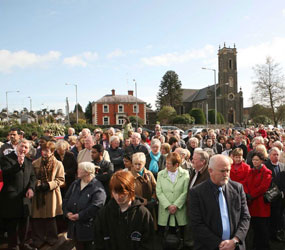 DUBLIN, Ireland – The shooting of a policeman in Northern Ireland was described as “cold-blooded murder” by Bishop John McAreavey of Dromore and his Church of Ireland counterpart, who said there is “no going back” to the days of violence that killed more than 3,500 people over 30 years.

Twenty-year police veteran Stephen Paul Carroll, 48, was shot in the head March 9 while getting out of his car in Craigavon, County Armagh, where he was responding to an emergency call for help.

The three killings have raised fears that Northern Ireland may be returning to the sectarian violence that was known as the Troubles, which began in the late 1960s and ended with the signing of the Good Friday peace agreement in 1998.

In a joint statement March 10, Bishop McAreavey and Church of Ireland Bishop Harold Miller of Down and Dromore said the murder of Carroll was “a morally bankrupt act. Our thoughts and prayers are with his family at this cruel time.

“Those who perpetrated this murder and other recent atrocities have nothing to offer the future of our society. Their god is destruction. They are seeking to destroy the peace we are building – the normalizing of cross-community policing, the cross-party working of the (Northern Ireland) Assembly, and the desire to draw a line under 30 years of troubles. In fact, they will destroy only their own souls,” said the bishops.

The last time a police officer was killed in a terrorist attack in Northern Ireland was in 1997.

At the opening of the Irish bishops’ spring meeting March 9, they issued a statement on the murder of the British soldiers, who were attacked while opening their barracks gate for a pizza delivery.

“This was a direct and heinous attack on the sanctity of human life and on efforts to build an agreed political way forward in Northern Ireland,” the bishops said.

“The people of Ireland have overwhelmingly rejected the use of violence as a means of achieving political ends,” they said. “Those who propose any other way wreck our future and destroy hope. We call on all citizens to redouble their efforts to build a peaceful society which pursues justice and reconciliation through the patient dialogue of the political process.”