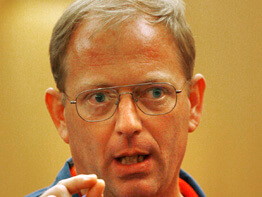 WASHINGTON – In a spirited exchange with victims of child sex abuse, the head of the U.S. bishops’ child protection committee said March 20 that bishops must work together to prevent cover-ups of clergy child sex abuse.

Cover-ups cannot be condoned and several bishops and priests have resigned over cover-ups, some after being told to do so by the Vatican, said Bishop Gregory M. Aymond of Austin, Texas.

“We can’t hold each other responsible. We are responsible to the pope,” he said of U.S. church leaders’ efforts to prevent cover-ups.

Bishops rely on “fraternal correction” by which they try to influence a fellow bishop to alter his approach to sex abuse, he said.

Bishop Aymond, chairman of the bishops’ Committee for the Protection of Children and Young People, spoke at Jesuit-run Georgetown University in Washington to assess the progress made since the bishops adopted sex abuse prevention policies in 2002.

In a question-and-answer session afterward, the bishop was asked about cover-ups, opposition by some bishops to relaxing the statute of limitations in sex abuse cases, the publishing of names of credibly accused priests and if the church has any responsibility for priest-abusers once they have been permanently removed from ministry.

Some questioners identified themselves as victims. Several said the cover-up of abuses was just as bad as the abuses themselves, that erring bishops should be held accountable and that the cover-ups were the result of incompetence and malfeasance.

“Where there was a cover-up, we need to apologize as individuals and as a church,” said Bishop Aymond.

In answer to a question, the bishop said that “fraternal correction” has been used in the U.S.

“We are holding ourselves accountable and calling our brothers to be accountable,” he said. “What’s going on here is not a police approach.”
Afterward, he told Catholic News Service that there is no streamlined procedure by which U.S. bishops can make the pope aware of any concerns about a specific bishop.

Bishop Aymond described to CNS a three-level approach to “fraternal correction.” The first step is for a bishop to raise concerns directly to the bishop in question; step two is for a group of bishops to meet with the bishop about their concerns; and the last step is to raise these concerns with the apostolic nuncio, the pope’s representative to the U.S. hierarchy, he said.

During the question-and-answer session, Bishop Aymond said that “genuine cover-up” had to be distinguished from some decades-old cases where an abusing priest was allowed to continue in ministry because the bishop took the advice of a therapist or rehabilitation center that the priest was no longer a danger.

“Psychology has more to say now than it did 30, 40, 50 years ago,” he said.
“But we can’t use psychologists or what they said as an excuse. It’s not logical to keep transferring that person (abusing priest),” said the bishop.
Regarding the opposition by bishops in some states to relaxing or eliminating the statute of limitations on child sex abuse cases, Bishop Aymond said that lawyers cite “good reasons” for the existence of such statutes.

“After a certain period of time it’s hard to pursue real justice” as key figures die or can no longer be found, he said. “It becomes harder to re-create the situation.”

At the same time, numerous bishops have reached monetary settlements with victims in cases where the statute of limitations expired many years earlier, he said.

Bishop Aymond opposed establishing a national database that would list all priests credibly accused of sexually abusing a minor. He said the decision about publishing names should be left to each diocese depending on local circumstances.

Once there is a new accusation, it should be reported to the parishes and local communities in which the priest ministered, he said.

Bishop Aymond said the church is struggling over the issue of what to do with priests who have been removed from ministry because there is a fear that, once severed from church control, they can abuse again in the general society.

“We are struggling with the monitoring and supervising of priests no longer in ministry,” he said.

Deciding how and if this can be done is complicated and bishops have sought the advice of law enforcement officials, he said.

In his speech, given from notes, Bishop Aymond said that “the bishops lost credibility for their actions or lack of actions” regarding clergy child sex abuse.

Bishops must continue to find victims and “offer our apology, healing and counsel,” he said.

In seminary formation programs, the church must do “everything possible” so that seminarians understand themselves psychologically, emotionally and sexually and any signs of problems can be spotted, he said.

The bishop expressed hope that the church’s efforts to prevent child sex abuse also help society in general deal with the problem.

“We must help to change society. We are doing our best that sex abuse never happens again,” he said.