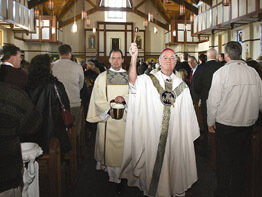 After more than four decades of waiting, parishioners of St. Bartholomew in Manchester rejoiced in the opening of their much-anticipated new church when Bishop W. Francis Malooly, western vicar, led a jubilant dedication liturgy Dec. 16.

As cold, wintry winds whipped across the former farmland where the grand brick church now stands, some 700 people huddled in front of the $6 million structure and strained to watch Bishop Malooly accept the keys and construction documents of the new church.

Festooned in brightly colored capes and feathered caps, members of sword-bearing Knights of Columbus formed an honor guard as Bishop Malooly processed into the building while the choir sang “Alleluia! Sing To Jesus.”

With throngs of excited parishioners following, the western vicar was accompanied by Bishop Mitchell T. Rozanski, eastern vicar; Bishop Denis J. Madden, urban vicar; and more than 25 priests and deacons. Retired Archbishop William D. Borders was also on hand, as were area ecumenical leaders.
Cardinal William H. Keeler, who had been scheduled to lead the celebration, was ill and unable to attend.

The new church, constructed in a traditional style, has been a dream for many decades at the steadily-growing faith community. There are currently 1,200 registered families – up from 800 a decade ago.
Parishioners had been worshipping inside a historic country church built more than 140 years ago that only seats 180 people. The new church can accommodate more than 700 people.

During the liturgy, Bishop Malooly anointed the altar with sacred oil and deposited relics of saints inside the altar – including altar relics from St. Frances Cabrini, Hampstead, the now-closed former mission of St. Bartholomew. A parishioner had discovered the old mission altar, with the relics inside, at an antique shop.

Several priests anointed the walls of the building and the entire congregation knelt as the litany of the saints was intoned.

“We come into this house in order to be strengthened and bring Christ’s love to others,” said Bishop Malooly, noting that all who will worship inside the new church are called to “take the Lord we receive in Communion back to our own communities.”

A large rose window designed by Maryland Art Glass of Hereford features the cross of Christ with circlets representing the arms of Pope Benedict XVI, the Archdiocese of Baltimore, the State of Maryland and the Carroll family.

Father Roach said he was proud that many craftsmen from the parish also contributed their talents to the new church. They included James Moore, who built the altar and Michael Gary, who constructed the tabernacle table, credence table, holy water fonts and holders for the Stations of the Cross.

“I felt very honored to do it,” said Mr. Gary, a carpenter whose children helped him sand the oak for his pieces. He called it “a tribute to the spirit of our community” that parishioners united behind the building of the new house of worship.

The sanctuary lamp was transferred from St. Bartholomew’s old church and some of the artwork was acquired from other Catholic institutions in the archdiocese and around the country. The altar piece, which depicts a crucifixion scene, was originally in the Carmelite Convent on Biddle Street in Baltimore. The Statue of Mary as the Mystical Rose was from the Jesuit Novitiate of St. Stanislaus in Frederick and later stood in Visitation Monastery in Frederick. The Cross of Jesus, the High Priest was originally from St. Agnes, Catonsville.

“The parishioners really like the utilization of liturgical and devotional objects,” said Father Roach. “Even though it’s a new building, it gives it a sense of continuity.”

Elinore Frush, a member of the fundraising, planning and building committees, said the design of the new church “reminds us of the central place that the Lord should have in our lives.”

“Everyone says the same thing when they see it – ‘wow!’” she said. “I love the warmth of the wood inside the church. It makes it inviting and welcoming.”

The old church will continue to be used for funerals, small weddings and other small events, according to the pastor.

The parish has conducted four phases of a capital campaign, he said, which has already raised $3.5 million for the project.