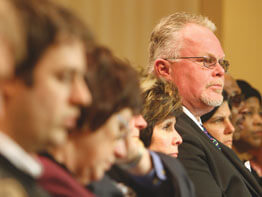 Bishop Denis J. Madden, urban vicar of the Archdiocese of Baltimore, and Kirk Noble Bloodsworth, who converted to the Catholic faith while on death row for a murder conviction that was later overturned, were among 23 men and women appointed to the Maryland Commission on Capital Punishment July 10 in Annapolis.

Governor Martin J. O’Malley introduced the members of the commission, which was created by an act of the General Assembly during the 2008 legislative session. It will be chaired by former U.S. Attorney General Benjamin Civiletti.

Bishop Madden is among those who have advocated for the abolishment of the death penalty in Maryland. Previous attempts to do so have failed.

“There are better ways to resolve the issue. Hopefully, this will serve the community and help to bring a more humane judgment to all of this.”

Bishop Madden is one of three representatives from the religious community on the commission, the others being Rabbi Mark G. Loeb, of the Beth El Congregation in Baltimore County, and Reverend Alan M. Gould Sr. of the A.M.E. Church in Cambridge.

The commission includes 13 gubernatorial appointments and represents a diversity of views. Scott Shellenberger, the Baltimore County State’s Attorney, is a notable proponent of the death penalty.

“It’s certainly an issue where reasonable minds can differ,” Mr. Shellenberger said. “If you’re going to have a commission study, it’s important to have both sides. I’m here because the statute required a prosecutor who is elected who has actually prosecuted a death penalty case. When you look around the state, there aren’t a lot of those.”

Commission members who have had family members killed come down on different sides of the issue. After her daughter was raped and murdered in 1998, Vicki A. Schreiber argued against the death penalty for her daughter’s killer and has chaired a group named Murder Victims’ Families for Human Rights.

After the Commission on Capital Punishment was introduced, Mr. Civiletti called it to order and set about scheduling a series of public hearings. The commission will submit its findings and recommendations to the General Assembly on or before Dec. 15, 2008.

According to a statement from the governor’s office, the law that created the commission requires it to make recommendations that address the following: