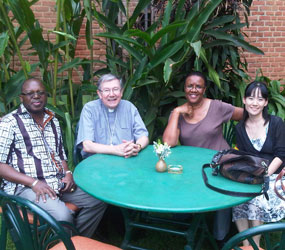 In meeting with survivors of the Tutsi Genocide in Rwanda, Bishop Denis J. Madden was struck by the inner turmoil endured by so many in the years following the conflict.

“They all remarked that they were really on the brink,” said Bishop Madden, a board member of Baltimore-based Catholic Relief Services who was in Rwanda Jan. 27-29 to celebrate CRS’s half century of service in the African nation.

“One woman said she was surely ready to kill herself,” Bishop Madden recalled, his voice choking with emotion. “The tragedy of any genocide is terrible, but the added tragedy is that it was family on family, Catholics on Catholics, priests and nuns on priests and nuns.”

A major part of CRS’s outreach in Rwanda is promoting peace and reconciliation more than a decade after a bloody civil war left one million people dead.

CRS works with the Peace and Justice Commission of the Catholic Church of Rwanda, partnering with parishes to train local leaders in conflict management and reconciliation.

CRS is also active in agriculture and microfinance programs and the President’s Emergency Program for AIDS Relief.

The agency’s presence in Rwanda began in the 1960s with a large-scale nation-wide school feeding program. In the 1980s, CRS expanded its focus on small enterprise development and agricultural production. The agency also managed U.S. government-provided food and other aid in the early 1990s.

After war broke out in 1994, CRS focused on emergency needs and began several agricultural rehabilitation programs. The agency helped construct homes for the displaced, offered food programs and other services.

Bishop Madden represented CRS at a special Jan. 28 anniversary Mass in Kigali attended by Rwandan Prime Minister Bernard Makuza. The bishop said he was impressed with the Rwandans’ great love for their faith and their sense of joy in expressing that faith.

“They are truly trying to be forgiving because they realize they are trying to do that as Christians,” Bishop Madden said. “They are trying their level best to do it. They lead this Gospel life, and the Eucharist is very important to them.”

Bishop Madden visited a parish outside Kigali made up of 60,000 Hutu and Tutsi parishioners and staffed by two priests. Parishioners of both ethnic groups form small communities of 15-40 people where they pray and work together.

Rwandan Catholics have a keen sense of belonging to the wider Catholic Church, Bishop Madden said.

“Every single Catholic group that I met would always ask about the community in America,” he said. “They meant the Catholic community. It was very touching.”

Before leaving Rwanda, Bishop Madden laid a wreath at the Gisozi Genocide Memorial where nearly 200,000 genocide victims are buried.