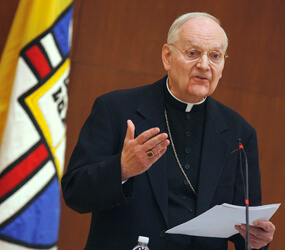 WASHINGTON – Bishop Donald W. Trautman of Erie, Pa., former chairman of the U.S. bishops’ liturgy committee, sharply criticized what he called the “slavishly literal” translation into English of the new Roman Missal from the original Latin.

He said the “sacred language” used by translators “tends to be elitist and remote from everyday speech and frequently not understandable” and could lead to a “pastoral disaster.”

“The vast majority of God’s people in the assembly are not familiar with words of the new missal like ‘ineffable,’ ‘consubstantial,’ ‘incarnate,’ ‘inviolate,’ ‘oblation,’ ‘ignominy,’ ‘precursor,’ ‘suffused’ and ‘unvanquished.’ The vocabulary is not readily understandable by the average Catholic,” Bishop Trautman said.

“The (Second Vatican Council’s) Constitution on the Sacred Liturgy stipulated vernacular language, not sacred language,” he added. “Did Jesus ever speak to the people of his day in words beyond their comprehension? Did Jesus ever use terms or expressions beyond his hearer’s understanding?”

Bishop Trautman made his remarks in an Oct. 22 lecture at The Catholic University of America in Washington, as part of the Monsignor Frederick R. McManus Lecture Series. Monsignor McManus, a liturgist, served as a peritus, or expert, during Vatican II.

The Roman Missal has not yet been given final approval for use in the United States. The U.S. bishops were scheduled to vote on four items pertaining to the missal at their November general meeting in Baltimore. It is expected that the Vatican Congregation for Divine Worship and the Sacraments would give its “recognitio,” or approval, at some point following the U.S. bishops’ vote.

Bishop Trautman took note of sentences in the new missal that he said run 66, 70 and 83 words, declaring that they were “unproclaimable” by the speaker and “incomprehensible” to the hearer.

“American Catholics have every right to expect the translation of the new missal to follow the rules for English grammar. The prefaces of the new missal, however, violate English syntax in a most egregious way,” Bishop Trautman said, citing some examples in his remarks.

“The translators have slavishly transposed a Lain ‘qui’ clause into English without respecting English sentence word order,” he added. The bishop also pointed out subordinate clauses from the missal that are “represented as a sentence,” and sentences lacking a subject and predicate.

Bishop Trautman also questioned the use of “I believe” in the retranslated version of the Nicene Creed, “even though the original and official Nicene Creed promulgated by the first Ecumenical Council of Nicaea in 325 said ‘we believe’ in both the Greek and Latin versions.

“Since this is a creedal prayer recited by the entire assembly in unison, the use of ‘we’ emphasized the unity of the assembly in praying this together as one body. Changing the plural form of ‘we’ to ‘I’ in the Nicene Creed goes against all ecumenical agreements regarding common prayer texts,” he said.

The bishop complained about the lack of “pastoral style” in the new translation. The current wording in Eucharistic Prayer 3 asks God to “welcome into your kingdom our departed brothers and sisters,” which he considered “inspiring, hope-filled, consoling, memorable.”

The new translation asks God to “give kind admittance to your kingdom,” which Bishop Trautman called “a dull lackluster expression which reminds one of a ticket-taker at the door. … The first text reflects a pleading, passionate heart and the latter text a formality – cold and insipid.”

Bishop Trautman quoted the Constitution on the Sacred Liturgy, which said rites and texts “should radiate a noble simplicity. They should be short, clear, free from useless repetition. They should be within the people’s powers of comprehension, and normally should not require much explanation.”

“Why are these conciliar directives not implemented in the new missal?” he asked. They are “especially” relevant, Bishop Trautman added, to “the people of the third millennium: children, teenagers, adults, those with varying degrees of education, and those with English as a second language.”

He acknowledged that “there are those who disagree with the way the liturgical reform of Vatican II was interpreted and implemented” and who maintained that “a reform of the reform” was necessary to stem what they saw as “diminishing religiosity (and) declining Mass attendance” tied to the Mass texts.

As a consequence, “a major and radical change” and “a major pastoral, catechetical problem erupts” in the new missal during the words of consecration, which say that the blood of Christ “will be poured out for you and for many,” instead of “for all,” as is currently the practice.

“For whom did Jesus not die?” Bishop Trautman asked. “In 1974 the Holy See itself had approved our present words of institution (consecration) as an accurate, orthodox translation of the Latin phrase ‘pro multis,’“ he added. “It is a doctrine of our Catholic faith that Jesus died on the cross for all people.”

Bishop Trautman took issue with a 2006 letter to bishops by Nigerian Cardinal Francis Arinze, then head of the Vatican Congregation for Divine Worship and the Sacraments, which said that “salvation is not brought about in some mechanistic way, without one’s own willing or participation.”

“I respond that Jesus died even for those who reject his grace. He died for all,” Bishop Trautman said.

Bishop Trautman hearkened back to Monsignor McManus, whom he called “an apostle of the liturgical renewal.”

“If Monsignor McManus were with us today, he would call us to fidelity to the Constitution on the Sacred Liturgy and encourage us to produce a translation of the missal that is accurate, inspiring, referent, proclaimable, understandable, pastoral in every sense – a text that raises our minds and hearts to God.”