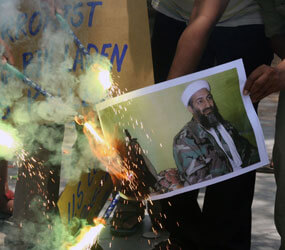 WASHINGTON – As word got out that Osama bin Laden had been killed by a Navy SEAL strike team in Pakistan, television and the Internet quickly began to feature images of spontaneous celebrations outside the White House and at ground zero in New York.

Just as quickly, blogs and social media pages such as Facebook began to rage with debates: about the morality of bin Laden’s killing and how it was accomplished and about the appropriateness of the celebratory atmosphere. Others questioned the meaning of the “justice” described by President Barack Obama in announcing bin Laden’s death.

“We must be clear what we understand when President Obama says ‘justice has been done,’“ said Gerard Powers, director of Catholic Peacebuilding Studies at the Kroc Institute for International Peace Studies at the University of Notre Dame, in an exchange of emails with Catholic News Service.

Also unclear was whether bin Laden could have been captured and brought to trial, Powers said. “If it was possible to capture bin Laden and he was killed anyway, then justice was not done.”

Bishop Paul S. Loverde of Arlington, Va., whose diocese includes the Pentagon, wrote that bin Laden’s death brings back painful memories for many in the community, which requires a note of caution.

“It is important that we recognize the distinction between support for this act of justice defending our nation and a misguided sense of revenge,” he wrote. “Let us not turn toward resentment or bitterness, but rather toward a deeper trust in our Lord. With confidence in his mercy and guidance, let us pray for those serving our country, for a conversion of heart among those who support the evils of terrorism and for the growth of faith and a desire for peace within our own hearts.”

The Tanenbaum Center for Interreligious Understanding and the Islamic Society of North America were among those applauding the elimination of the threat posed by bin Laden, but warning against misdirected hatred and stereotypes.

“We hope his death will bring some relief to all the families, of every faith and walk of life, who lost loved ones on 9/11 and in every other terrorist attack orchestrated at the hands of Osama bin Laden,” said a statement from the Islamic society, which quoted Obama’s description of bin Laden as “not a Muslim leader” but “a mass murderer of Muslims.”

The Islamic society said al-Qaida, the terrorist organization bin Laden headed, “has slaughtered scores of Muslims in many countries, including our own. So his demise should be welcomed by all who believe in peace and human dignity.”

A statement from the Tanenbaum center voiced gratitude that bin Laden, “one of history’s most infamous voices of hate and terror… is silenced and can no longer promote a violent agenda.”

But it cautioned against the “voice of hatred” emerging amid the scenes of national jubilation.

“On Twitter today, we see racial epithets used to describe bin Laden. We see stereotyping of all people who follow Islam. The venom expressed is not different in kind from the hatred that Osama bin Laden spewed,” said the Tanenbaum statement. “The question for those who tweet, write blogs, participate on Facebook and join in the media debate is: ‘Why do you think your blind hatred, unjust stereotypes of Muslims and promotion of violence is so different from bin Laden’s hate?’ And the answer, of course, is that it isn’t.”

The Tanenbaum statement went on to say: “Failing to recognize our common humanity is the first step in dehumanizing others, and a dangerous progression toward creating a country based on hate rather than respect, justice and inclusion.”

In one of the Catholic blog discussions, Jesuit Father James Martin, culture editor of the Jesuit magazine, America, captured some of the more charitable threads of the Internet debate:

“Osama bin Laden was responsible for the murder of thousands of men and women in the United States, for the deaths and misery of many thousands across the world, and for the deaths of many servicemen and women, who made the supreme sacrifice of their lives. I am glad he has left the world. And I pray that his departure may lead to peace,” wrote Father Martin.

Franciscan Brother Daniel Horan, a member of the theology faculty at Siena College in New York, questioned the point raised by some on his “Dating God” blog that “because we believe in the Resurrection, every death should be celebrated.”

“Well, I understand that sentiment, but what we really do at something like a funeral Mass is celebrate the life, both earthly and the next, of the person who has died – we don’t laud death as a good in itself,” he wrote.

The Vatican was among the religious organizations that were quick to weigh in with a statement acknowledging bin Laden’s faults, including: “spreading divisions and hatred among populations, causing the deaths of innumerable people, and manipulating religions to this end.” But the Vatican also admonished against the gleeful response: “In the face of a man’s death, a Christian never rejoices, but reflects on the serious responsibilities of each person before God and before men, and hopes and works so that every event may be the occasion for the further growth of peace and not of hatred.”

Powers said that there are other thorny moral issues raised by the case of bin Laden. They include the difference between attempts to assassinate heads of state, such as Libya’s Moammar Gadhafi, versus attempts to kill heads of terrorist organizations, such as bin Laden, which is less morally problematic, he said. Also subject to moral review might be whether the United States violated the sovereignty of Pakistan by waging the assault on bin Laden’s hiding place.

“Yet in Catholic teaching sovereignty is not an absolute,” Powers said. “If it was clear that Pakistan was unwilling or unable to take appropriate action against bin Laden and other terrorists in its midst, then, at some point, Pakistan cannot complain when others fulfill the responsibilities it cannot fulfill itself.”

Finally, Powers said, “even though we can justify the killing of bin Laden, we do so with a sense of deep regret and with a recommitment to develop nonmilitary ways to defend against terrorism and address its deeper roots, while cultivating the peaceable virtues without which no lasting peace is possible.”