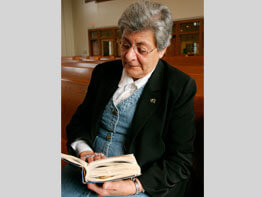 VATICAN CITY – Just as a president turns to his economic or military advisers for expert opinions on issues in those areas, the pope has his own team of biblical scholars for research and advice about the Scriptures.

In fact, more than a year before the Vatican told bishops’ conferences around the world that “Yahweh,” a name for the God of Israel that Jews do not say aloud, must not “be used or pronounced” in songs or prayers during Catholic Masses, Pope Benedict XVI asked the Pontifical Biblical Commission to research the issue.

Passionist Father Donald Senior, president of the Catholic Theological Union in Chicago and a member of the biblical commission, said Pope Benedict asked for the commission’s input after a Jewish leader requested that the church consider respecting their long tradition.

U.S. Cardinal William J. Levada, prefect of the Congregation for the Doctrine of the Faith and president of the biblical commission, said its primary task is to serve as a consultative body to his congregation and therefore to the pope and the church at large.

The commission, he told Catholic News Service, “ensures that there will be a dialogue on biblical themes at the very heart of the church.”

And, he said, the fact that the members come from different parts of the world “allows for a dynamic exchange of various cultural perspectives.”

Father Senior said the scholars have different approaches to the Bible, but all are recognized specialists in the field. Because their names are suggested to the Vatican by national bishops’ conferences and because they serve as Vatican consultants, “obviously you are not going to have people who are at loggerheads with the church,” he said.

Father Senior also said the members have discussed the fact that the commission’s membership is all male, while more and more women are distinguishing themselves in biblical scholarship.

“I don’t think the problem is at the Vatican,” he said, adding he is convinced the Vatican would welcome a national bishops’ conference nominating a woman.

Before the Second Vatican Council, the biblical commission was made up almost entirely of bishops and was charged with monitoring the orthodoxy of Catholic biblical scholars and overseeing the curriculum of biblical studies for seminaries and pontifical universities.

Father Senior said that, with Vatican II, its promotion of Bible reading and its openness to new trends in biblical scholarship, the commission went from being a watchdog agency to being a scholarly commission with a pastoral approach, focusing on the Bible and modern church concerns.

The changed approach, he said, is particularly evident in the last three commission documents:

– The 1993 document, “The Interpretation of the Bible in the Church,” examined different scholarly approaches to the interpretation of Scriptures. With the exception of its treatment of fundamentalism, the examinations were basically positive, with small sections warning of possible dangers if one method is used exclusively or radically.

– The 2001 document, “The Jewish People and Their Sacred Scriptures in the Christian Bible,” highlighted the importance of the Old Testament for Christianity, encouraged studying Jewish interpretations of the Hebrew Scriptures and condemned attempts to use New Testament criticism of some Jews as an excuse to denigrate Jews and Judaism.

– The latest document, “The Bible and Morality,” was to be released in English in September.

Father Senior said its central concern is “How do you take a text that is ancient – revered and sacred, but ancient – from another time and culture and have it be relevant to contemporary moral issues?”