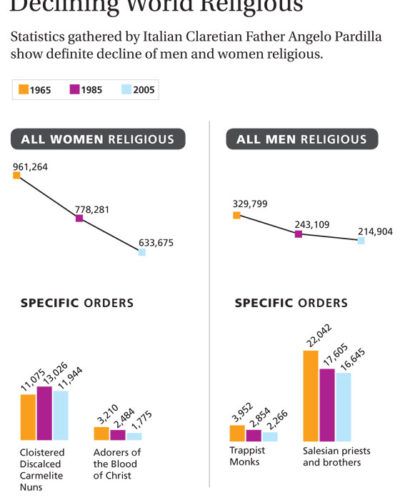 VATICAN CITY – Statistics leave no doubt that the number of women religious has dropped sharply over the last 50 years, but there is an ongoing debate over the reasons for the decline.

The question surfaced recently when L’Osservatore Romano, the Vatican newspaper, asked one priest to review another priest’s book about the phenomenon.

Italian Claretian Father Angelo Pardilla, author of “Religious Yesterday, Today and Tomorrow,” said the principal cause for the decline was that many religious misunderstood the teaching of the Second Vatican Council and lost a sense of their identity.

He cited as proof the fact that the number of vowed religious – both men and women – has dropped sharply since Vatican II, except in the contemplative orders that still wear habits and live with a regimented community life.

But Father Giancarlo Rocca, a scholar of the history of religious orders, questioned Father Pardilla’s thesis in the review he wrote for the Vatican newspaper.

Father Rocca agreed with Father Pardilla that factors contributing to the decline include materialism, secularism, the anti-authority movement of the late 1960s and declining family size.

But he said a misreading of the Second Vatican Council could not be the prime culprit, because in many places the numbers began to drop in the 1930s, long before the council opened in 1962.

For Father Rocca, the key is the emancipation of women.

Previously, he said, the socially approved options for women were either to marry and have children or join a religious order. He said it was no surprise that the orders hardest hit were those founded to teach or to nurse – two professions previously open only to unmarried women.

Sister Carol Regan, the superior general of the Holy Union of the Sacred Hearts and a member of the executive council of the International Union of Superiors General, said, “It is too facile to attribute it (falling numbers) solely to a misreading of Vatican II.”

For the Holy Union, which was particularly strong in France and Belgium, “the drop-off of new entrants began in the 1950s, perhaps even the late 1940s, in other words, after World War II with all the horror that brought to continental Europe,” she said. The women’s movement and the broader choices it gave women also obviously contributed to changed attitudes about religious life, she said.

Sister Regan said her order has about half the members it had in 1965, but is growing in Africa, especially in Cameroon and Tanzania.

“Our congregation leadership will come soon, very soon, from the Southern Hemisphere and all of us have to be prepared to welcome that,” she said.

The shift also poses financial challenges, Sister Regan said, because the growth is taking place in parts of the world where resources are lacking.

“Naturally, there is sadness where diminishment is sharpest, excitement where growth is clear and evident,” she said.

Sister Christine Anderson, a Scottish member of the Faithful Companions of Jesus, runs a leadership program in Rome for religious superiors and members of general councils, and has facilitated dozens of meetings of religious orders of men and women.

She described as “rubbish” the idea that religious do not know who they are today.

“I think those who hung in there in religious life know why they are there,” she said. “The doors are wide open and they can walk out. Either you say they hung in because they are too scared to move – and that could be true in a few cases – but the majority have hung in because they are on this love quest,” a quest to find God and give themselves completely to him by serving the church and the poor.

The sisters may not be wearing a habit, but things have not changed as much as many people think, Sister Anderson said.

The seeking continues through hours of solitary prayer, reciting the Liturgy of the Hours together, going to daily Mass, making an annual retreat and carrying out their work as a service to God and to others, she said.

If there is any confusion over the identity of religious, it exists among laypeople, Sister Anderson said, admitting that religious have had a difficult time explaining who they are in a language people today understand.

From her work with the leaders of religious orders grappling with the future, Sister Anderson said the most common attitude she sees is “outrageous hope.”

“They have an ability to live with uncertainty. Like Abraham, they have set out and they do not know exactly where they are going, but there is this sense of faith and hope that God is with us and God will be faithful,” she said.