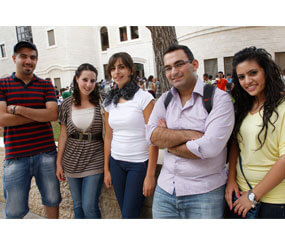 BETHLEHEM, West Bank – Students travel great distances and put up with checkpoints and other travel restrictions on a near-daily basis to attend Bethlehem University, the only Catholic university in the Palestinian territories.

Looking from the back row of an outdoor amphitheater on campus, one of the students gazed at the Israeli separation barrier, which many of the students must cross to get to school. The barrier is a series of barbed-wire fences, security roads and looming cement slabs that, if completed as planned, would stretch 400 miles through the West Bank and restrict the movement of 38 percent of the residents of the West Bank.

“You have to have the magnetic ID to go to Jerusalem,” said Chris Jujat, a second-year accounting student from Jerusalem. “This is a long process to go someplace eight kilometers (five miles) away.”

“We need to cross the border to Jordan to go to the airport,” added Jacoub Sleibi, who interned in Washington over the summer and who, like his fellow students, chafes at the restrictions on seemingly ordinary travel.

Last December, the Israeli High Court ruled that Berlanty Azzam, a Gaza-born student, was a security risk by virtue of being a resident of the Gaza Strip, and it banned her from attending classes at Bethlehem University. Azzam managed to complete her education and graduate in January through correspondence courses.

Yet despite the difficulties, a sense of hope persists.

“I hope to become a successful travel agent” after graduation, said Elen Kurt, a first-year Bethlehem University student who spoke with a nearly imperceptible accent. “I hope one day to open my eyes and see peace, really.”

“I don’t believe in predetermination,” Sleibi said. “I believe we should always make the right choice,” adding his belief that the situation would greatly improve if the United States recognized Palestine as an independent nation.

“I support nationwide resistance” to Israeli rule, Sleibi said, “but education is the greatest weapon.”

Yet the students’ thirst for education has led to a remarkable growth in the student body.

The university’s enrollment, 2,300 students a few years ago, is now up to 3,000. Students can major in a variety of fields that are apropos to their ongoing reality, including peace studies. There is also a swelling hotel- and restaurant-management curriculum as students prepare for the day when there will be an independent Palestinian state, with tourists flocking to Bethlehem and other Holy Land cities.

The Christian Brothers administer the school and work tirelessly to raise the money to keep the school going, as student tuition pays but a fraction of the overall cost.