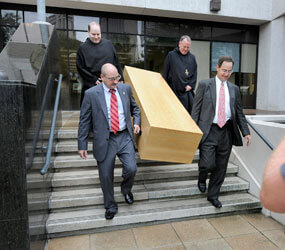 At stake, Abbot Brown said, is the monks’ ability to engage in free enterprise through the sale of the caskets, which range in price from $1,500 to $2,000, but which are considerably less expensive than many of the caskets sold to bereaved families by funeral home operators.

The simplicity of the caskets reflects the sacred Christian theology that at the end of life, the body is returned to the earth but the soul lives on, Abbot Brown said.

The Benedictines of St. Joseph Abbey in St. Benedict, La., have made the caskets for decades to bury their brother monks, but public interest in the caskets began in the early 1990s and has grown over the years.

In 2007 the Benedictines launched St. Joseph Woodworks, headed by Deacon Mark Coudrain, a master woodworker, to begin making caskets to sell to the public.

“We are men not only of prayer, but we also are men who have been known to be entrepreneurs, making an honest living by the labor of our own hands,” Abbot Brown said. “We are here today because we feel that our right to economic freedom is being denied us.

“All we want to do is to be able to construct, craft and build simple wooden coffins to sell to our friends, associates and the general public,” he continued. “We are not a wealthy monastery, and we were hoping that the income we could generate from the sale of these coffins would help us meet the educational and the health care needs of our monks.

“We would like to see the day when we can freely operate St. Joseph Woodworks without any unreasonable government restrictions,” he said.

The monks are being represented in their federal court fight by the Arlington, Va.-based Institute for Justice, a nonprofit public interest law firm. At a news conference on the steps of the U.S. District Court for the Eastern District of Louisiana, the institute passed out media kits with the catch phrase “Free the Monks and Free Enterprise.”

“What you see in front of you is a casket that the monks have made,” said Jeff Rowes, a senior attorney with the institute. “A casket is just a box. It has four sides, a top and some upholstery. But for the sin of selling this casket to the public, the state of Louisiana can put you in jail for up to 180 days.”

Rowes said the Louisiana State Board of Embalmers and Funeral Directors, which represents licensed funeral homes in the state, also has issued subpoenas to Abbot Brown and Deacon Coudrain “and are now threatening them with fines of up to $2,500 for every casket they sell.”

Rowes said there was “no legitimate rationale” for the Louisiana law restricting the sale of caskets to licensed funeral home operators.

A few months after a story about the new casket-making venture was published in 2007 by the Clarion Herald, the official newspaper of the Archdiocese of New Orleans, the state board issued a “cease and desist” order to the abbey’s woodworking team.

Over the last two years, the abbey has attempted to get the state law changed, but bills that would have accomplished that never made it out of committee in either the House of Representatives or the Senate.

Attempts at a compromise with the funeral home directors failed, Deacon Coudrain said.

“One offer we got was that they would buy it from us for half of what we were selling it for, then they would add $1,000 to it and sell it to the public,” Deacon Coudrain said.

The 6th and 9th U.S. Circuit Courts of Appeal have struck down laws restricting casket sales, similar to Louisiana’s, while the 10th Circuit has upheld an Oklahoma law that protected funeral homes.

The monks are hoping for a quick hearing and a stay of a proceeding against the abbey by the Louisiana funeral directors’ board.

Abbot Brown said at least three other monasteries in the U.S. – St. Meinrad Archabbey in St. Meinrad, Ind.; New Melleray Abbey in Peosta, Iowa; and Mount Michael Abbey in Elkhorn, Neb. – have casket-making operations and sell their coffins to the public.