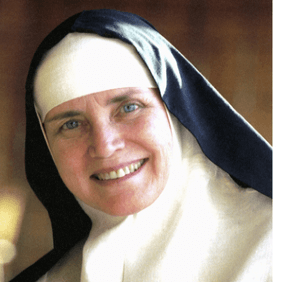 By Jack Sheedy
Catholic News Service
BETHLEHEM, Conn. (CNS) — On Hollywood’s red carpet Feb. 26, the night of the 84th Academy Awards presentations, actress Michelle Williams was wearing Louis Vuitton. Cameron Diaz was wearing Victoria Beckham.
Black-habited Mother Dolores Hart, prioress of the Abbey of Regina Laudis, told reporters she was wearing the seventh-century Benedictine St. Telchilde.
“They didn’t know what I was talking about,” Mother Dolores said in an interview at the rural Connecticut abbey 12 days and 3,000 miles later with The Catholic Transcript, newspaper of the Hartford Archdiocese.
“I think maybe that’s why they didn’t take many pictures of me on the carpet, because they didn’t know what to do with me,” she added with a laugh.
If you watched the event on television, you might have caught a glimpse of Mother Dolores standing incongruously on the red carpet wearing the habit of St. Telchilde, or Theodichildis, first abbess of the Benedictine Jouarre Abbey in Seine-et-Marne, France.
Mother Dolores was in Hollywood because a short HBO documentary titled “God Is the Bigger Elvis,” which features her and other cloistered nuns at Bethlehem’s abbey, was up for an award. While it didn’t win, the nun’s presence at the Oscars brought back memories for her fans.
Yes, this mother prioress has a fan base. Known for sharing Elvis Presley’s first on-screen kiss, in the 1957 movie “Loving You,” Dolores Hart was a promising young stage and screen star and also appeared in films with Montgomery Clift, Anthony Quinn, Marlon Brando and others. She appeared with Elvis again in the 1958 movie “King Creole.”
But, in 1963, she shocked her family, friends and fiance by kissing Hollywood goodbye and entering the community of Benedictine nuns.
“God Is the Bigger Elvis” began as an idea of the late Archbishop Pietro Sambi, who was apostolic nuncio to the United States and had invited Mother Dolores to the nunciature in Washington two years ago. “When I went in to see him, he said, ‘Madre, I want you to do a film on consecrated life.’ And I said, ‘But, Your Excellency, I’m an enclosed Benedictine nun. I can’t do that sort of thing. I have no access any longer to this sort of thing and I don’t know anyone in California.'”
He insisted that the Holy Spirit would guide her. She returned to the abbey and told her superior, Mother Abbess David Serna. They decided to pray about it.
“It was three days after that that HBO called us,” Mother Dolores said. “They had had no commission from (Archbishop Sambi). They didn’t know him. They hadn’t called him. So I know it’s no set-up. The choreographer was … ,” Mother Dolores said, casting her sky-blue eyes heavenward.
The 36-minute documentary is a revealing peek behind the walls of the abbey, the only one of its kind in the United States, founded in 1947 by Mother Benedict Duss, who led it until her death in 2005.
We see Mother Dolores caring for birds in her aviary, entertaining them with recorded music. We meet Mother David, who already had taken her vows when young Dolores became a novice in 1963. Then-Sister David thought the newcomer was “a lightweight” and was not always kind to her. “Who would have thought the actress was going to stay? I mean, really!”
Besides her career, the actress also gave up her engagement to architect Don Robinson, who took it hard and never lost contact with her. “It was just impossible to explain,” Mother Dolores says in the film. “How do you explain God? How do you explain love?”
Life in the abbey means singing seven times a day, silence three times a day, frequent periods of prayer, strict obedience to superiors, caring for livestock, cultivating a garden and sharing a bathroom with up to 10 other nuns.
A scene near the end shows a visit by Robinson and his emotional leave-taking. “God bless you,” Mother Dolores says. “You, too,” he says and walks out the door, leaving it open as he goes. Mother Dolores gazes after him in silence, then turns away, crosses herself and gazes at a crucifix on the wall.
“That scene was amazing to me,” Mother Dolores told the Transcript, “because that day when Don left and I saw him go, something hit me and said, ‘I wonder if I’m going to see him again. I think I might not.’ … It was just this terrible sense of loss of a friend.”
The scene occurred near Easter last year. In late autumn, Mother Dolores had a fall that resulted in a mild concussion. She decided not to tell Robinson, because it would upset him. Days later, as Advent began, she learned Robinson had fallen. He had hit his head in the same place. He died Nov. 29.
When “God Is the Bigger Elvis” was nominated for an Oscar, director Rebecca Cammisa and producer Julie Anderson invited Mother Dolores to accompany them to the awards ceremonies.
The mother prioress is still a member of the Academy of Motion Picture Arts and Sciences and votes on the nominated films each year, based on DVDs she screens at the abbey.
She hopes the HOBO documentary would generate interest in the abbey’s project to renovate the abbey and make it more comfortable for aging nuns and safer for all 36 of them. It debuted April 5; other broadcast dates were April 13, 14 and 19. (Check local listings.)
– – –
PrevNext