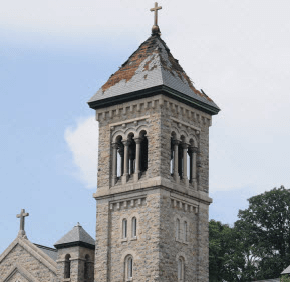 By Catholic Review Staff
UPDATED July 21 1 p.m.: The bell tower of the Chapel of the Immaculate Conception at Mount St. Mary’s University in Emmitsburg was struck by lightning July 19, which resulted in a fire, according to a report on the school’s website. A student witnessed the strike at approximately 8 p.m. and alerted the school’s office of public safety.
Firehouses from northern Maryland and Southern Pennsylvania responded. No one was in the chapel at the time and no injuries were reported.
According to Christian Kendzierski, director of media relations for Mount St. Mary’s, at this time, it does not appear the main chapel has been damaged, aside from the presence of smoke. The lower levels of the bell tower did sustain water damage, but the bell itself is intact. The most severe damage occurred on the rooftop level, which is above the bell.
A wedding, which had been scheduled for today, July 21, was relocated to the grotto. The chapel will remain closed until the structure’s complete security can be confirmed.
According to the school’s website, the chapel was built in 1910 and is the primary worship space for the university.
The chapel, where several Mount St. Mary’s alumni have been married, underwent renovations following the school’s 2008 bicentennial. Cardinal Edwin F. O’Brien celebrated the rededication Mass Sept. 13, 2011.
“This is one of the most significant plots of ground in the archdiocese,” Cardinal O’Brien said at the time. “What this chapel has meant to so many people coming here, where they have had that encounter with the living Christ, has been deeply rooted on this historic ‘Mary’s Mountain.’ ”
PrevNext