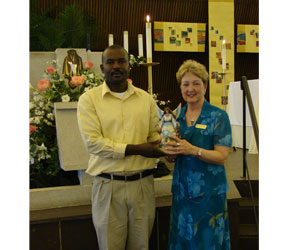 When images of the girls’ schools in Port-au-Prince named for St. Rose of Lima were disseminated after the Jan. 12 earthquake, students of St. Margaret School in Bel Air reacted with concern and empathy.

“When they heard the name of St. Rose of Lima, they were beside themselves,” said Jane Dean, the principal of St. Margaret. “That shows how attuned they are to it.”

Never mind that it’s another St. Rose of Lima School in Haiti, a five-hour drive north of the capital city, outside the small village of Jacsonville, that counts St. Margaret School as a major benefactor.

“After the earthquake, I visited St. Margaret classrooms, to reassure them that the St. Rose they had heard about was another school, not the one we have adopted,” said Carol Delss, a former teacher and assistant principal at the Bel Air School. “That lessened their concern some, but they still know that their help is needed. We told them, they still need our prayers.”

Delss and Dean, who will retire at the conclusion of the current school year, use their sister school in Haiti to teach about everything from charity to geography to seismology.

“This is our global outreach project,” Dean said.

The relationship dates to the late 1990s, when Delss’ son, Eric, a graduate of St. Margaret and John Carroll School, befriended another member of the Newman community at Virginia Tech. Gabriel Thelus, sponsored then by the Xaverian Brothers, returned to his native Haiti to teach agriculture.

“Gabriel came back to visit Eric,” Carol Delss said. “It was a profound experience for Eric, he learned you can be happy without a lot of things. He learned how you can be poor and still be strong of faith.”

The Delss family sponsored a child, $100 that covered education, school uniforms and one meal a day in Jacsonville for a year. The next year, that support turned into an eighth-grade project, and when Delss became an assistant principal, she told Dean, “We can do more.”

With Dean’s approval, St. Margaret School has raised more than $139,000 for its St. Rose of Lima in Haiti. This school year was a record-setter, as $23,000 was raised in the Bel Air school for the student body of 300 in Haiti since the earthquake.

“I ask parents to give $125,” Delss said. “Many give a lot more. … Gabriel (Thelus) has told me, ‘without St. Margaret, our school would not exist.’ I tell the children, know that you are making a difference.”