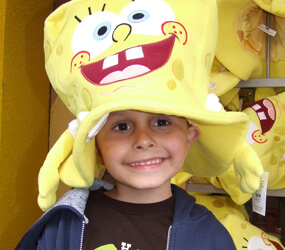 On a late October evening, Monique Spagna cradled her 1-year-old grandson, Carmine, in her Bel Air home. Another grandson, Luciano, ran around the living room chasing the family’s new kitten.

Still, the St. Margaret parishioner’s mind was on the eldest of her six daughters, Nikki, and grandson, Dominic Osorio, 7.

Nikki, was sitting by Dominic’s bedside as he lay in a coma at the Johns Hopkins Children’s Center. A cancerous tumor on his brain doubled in size since an MRI was performed in September and had become one-third the size of his brain.

“He’s been fighting this for two years now,” Monique said. “He’s responding to touch. He hasn’t been verbal for a long time.”

When he was 5, Dominic began getting persistent headaches. An MRI found a tumor, which required immediate surgery. He was in and out of the hospital and Nikki and Monique were there to provide around-the-clock medical care.

Nikki explained cancer to Dominic in a way only a little boy could understand. He would need to become a superhero named the Dominator and fight off evil megazoids.

Dominic has endured two years of surgeries, radiation treatments and Magnetic Resonance Imaging appointments. He wore a mask during radiation and remained still so he could fight off all the bad guys.

“He never knew he had cancer,” Monique said. “He would walk in smiling and he came out smiling. He was an inspiration to a lot of people.”

Dominic’s story has touched many across the U.S., thanks to a superhero comic book appropriately titled “The Dominator.”

The book is the creation of Dave Anderson, a manager at Buontempo Bros. pizza restaurant in Bel Air. Dominic used to regularly visit the restaurant with his family.

Anderson was struck by the young boy’s sense of humor and wanted to help make The Dominator a reality, so he developed the story, contacted local writers and artists and began to raise money.

“There are so many ways this comic book is touching lives,” Anderson said. “I just think his is a story that really needs to be told.”

Anderson often thinks about Nikki sitting at Dominic’s bed and the innocence of his own children.

“You don’t get those times back,” a clearly emotional Anderson said.

When Dominic awoke from one procedure, he twisted his index and middle fingers together and told his family, “God and I are like this.”

Jeannine Spagna, the mother of Carmine and Luciano, said she always envisioned Dominic acting like a big brother for her two sons.

“He used to cry about every little thing, but he didn’t cry through this whole experience,” Alayna said.

“The mystery of the Eucharist is tied with Jesus’ suffering,” Father Bolger said. “He could understand the love of Jesus.”

Father Bolger said St. Margaret prays for Dominic at Mass and added that the parish will provide comfort for his family.

“The gates of heaven,” Father Bolger said, “are in store for Dominic.”