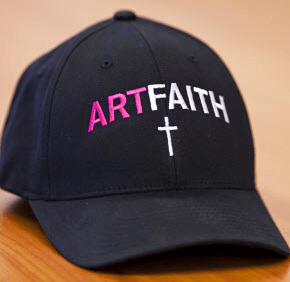 Friends and co-workers at the Catholic Center in Baltimore designed "ARTFAITH" hats in support of Monsignor Art Valenzano. (Tom McCarthy Jr. | CR Staff)|
By George P. Matysek Jr.
gmatysek@CatholicReview.org
Monsignor Arthur “Art” Valenzano calls it “crazy,” but he considers having to go through a second bone-marrow transplant in seven years a kind of blessing – not an ordeal he’d seek out, he emphasized, but one he believes has been a blessing nonetheless.
“It makes me realize that I depend on God for everything,” said the rector of the Basilica of the National Shrine of the Assumption of the Blessed Virgin Mary in Baltimore. “It makes me appreciate that our Catholic faith is not only a personal relationship with God, but a relationship with the family of the church.”
Monsignor Valenzano underwent the bone-marrow transplant Feb. 19 at The Johns Hopkins Hospital in Baltimore. His younger brother, Francis Valenzano, provided the donation just as he had in 2006 when Monsignor Valenzano underwent his first bone-marrow transplant to treat acute myeloid leukemia.
In preparation for the most recent procedure, Monsignor Valenzano underwent a week of chemotherapy and one treatment of total-body radiation. Two days of chemotherapy followed the transplant, and the priest is now partaking in daily treatments to receive medication to prevent his immune system from rejecting the transplant – treatments that last nearly five hours.
“I use that time to pray the rosary or the Divine Office, and get in some serious reading,” he said. “Sometimes, I’m so tired, I just sleep.”
Monsignor Valenzano said he enjoys interacting with other patients at the hospital.
“They are fantastic,” he said.
Because of his suppressed immunity, Monsignor Valenzano is unable to greet parishioners or visit the sick. He still concelebrates Mass at the basilica, but wears a protective mask. When he underwent his first transplant, Monsignor Valenzano suffered a bout with pneumonia because of his weakened immunity.
“I have to be very careful,” he said.
Monsignor Valenzano said he has been flooded with notes, Mass cards and well wishes from many people including Archbishop William E. Lori, fellow priests, archdiocesan employees and basilica parishioners. He was delighted that numerous people turned out for a Jan. 26 bone-marrow drive at St. Mary’s Seminary in Roland Park – an event given in his name that will benefit people throughout the nation and beyond by linking those in need of transplants with possible matching donors.
“It was wonderful,” he said.
Many of the priest’s friends are wearing baseball caps emblazoned with “ARTFAITH” on the front and “Praise Jesus,” one of Monsignor Valenzano’s favorite exclamations, on the back. Others are sporting special bracelets.
“I’ve gotten tremendous support,” he said. “I pray that anyone going through this challenge can have that kind of support.”
Monsignor Valenzano won’t know for at least 30 days how successful the transplant has been.
“I feel strong,” he said. “I really appreciate everyone keeping me in their prayers.”
Also see:
Overcoming cancer teaches Westminster pastor lessons on faith
Bone-marrow drive to help Baltimore priest, others
PrevNext