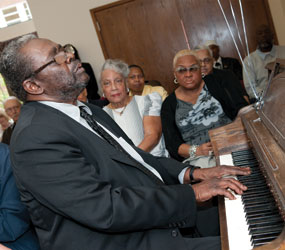 It’s hard to believe that it’s been 30 years since Catholic Charities first put into bricks and mortar its belief that everyone is entitled to a home.

Residents Delores Petro and Dorothy Hawkins told how they loved living at Basilica Place, and the three residents with the longest tenure – Thelma Freeman, Mary Prosser and Gloria Wilson – were honored with corsages. A moment of silence honored 30-year resident Virginia Bryson, who had died that morning. Her daughter accepted her corsage.

Prosser, 92 and a resident of Basilica Place since 1981, remembers her first impression of an apartment on the 16th floor.

“When I first came I didn’t want it because it was too high,” she said. “I’d never been in a building this high before.”

Staff, however, told her that that particular unit was available, and didn’t know when there would be another opening.

Gloria Wilson, 60, also moved in 30 years ago, when her husband was the building’s maintenance man. After he died, she stayed in Basilica Place.

“I like the safety and the location,” she said. “I go to Mass at the Basilica and I go to the library.”

She enjoys the central location, which lets her easily access buses and the light rail. And she found love again in 2006, when she met her second husband, a widower, in the laundry room of Basilica Place.

Residents contributed their talents to the April 13 celebration as well. Pianist Larry Willis played a composition he wrote in honor of the occasion called “Sanctuary.” Henry Baxter gave a violin performance, and a choir comprised of residents sang “This Little Light of Mine.” The Dunbar Jazz Ensemble also provided music.