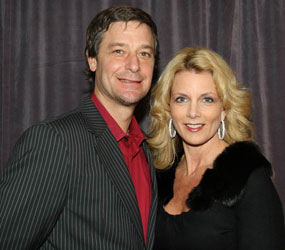 Virtually nothing has been guaranteed to Jamie Moyer during his two-and-half decades in Major League Baseball.

For the first 10 years, he was a journeyman, but he has since become an All-Star and a member of a World Series-winning club. At the age of 47, Moyer is regarded as a physical marvel.

Knowing every second is precious, the former Baltimore Oriole and his wife, Karen, are hoping to secure happiness for others locally. The couple is aiming to open a bereavement camp for children ages 6 to 17- called Camp Erin- this summer in Baltimore. There are currently 36 of the camps in 23 states. The purpose is to help children who have lost someone close to them.

“The camps I have been to have left permanent memories,” Jamie said. “Some of the memories are very sorrowful for me. I see these kids dealing with this, and hopefully we can help them remember those people in a positive way. When some of these campers get too old to attend, they find it in their hearts to come back as counselors. That’s when you know you’ve hit home.”

Together, the Moyers want to operate a camp in every Major League Baseball city.

Camp Erin is part of the Moyer Foundation, a charitable organization the couple founded, and is a weekend-long experience that combines fun and activities with grief support. A Moyer Foundation spokesperson said the group is in the final stages of firming up a partnership with the local Camp Erin group.

“As soon as we have the partnership finalized,” the spokesperson said, “we will know more about dates and camp location for 2010.”

Support from the Moyer Foundation and local communities keeps Camp Erin free for all campers. It has served children affected by the Sept. 11, 2001 terrorist attacks and many others throughout the country.

The Moyers created the camp after meeting a Washington girl, through the Make-A-Wish Foundation, who had liver cancer. Her concern for others, despite her own pain, stirred the Moyers.

“Tomorrow is not guaranteed,” Karen said. “We feel socially responsible. We feel this is what we’re most responsible for doing. We want to leave these legacies.”

The Moyer Foundation supports programs that serve critical needs of children in severe distress. Based in Seattle, the foundation has raised more than $19 million to help support more than 225 different programs that help those children.

For Jamie and Karen, sharing their good fortunes has become a way of life.

“I think as an athlete, you go to a certain level,” Jamie said. “You go to a school and read to kids. When you go out and start something on your own, you find there are issues out there.”

Karen is the daughter of former University of Notre Dame men’s basketball coach Digger Phelps, currently an analyst for ESPN. The Phelps were strongly Catholic and Karen attended Catholic school. She was regularly encouraged by her parents to give back.

“I loved being in that environment,” Karen said.

Jamie was Protestant as a young man, but converted when he married Karen. Their eight children were also baptized Catholic. The last two were adopted from Guatemala in recent years.

“We go to Mass every Sunday, no matter where we are,” Karen said of her busy family.

Karen has been a companion and spiritual guide for Jamie.

“She’s opened my eyes to many things, whether it is through Catholicism or life,” Jamie said.

For Jamie, Catholicism is a constantly unraveling mystery.

“Do I think I’ll ever completely understand it? No,” Moyer confessed. “You just try and bite off as many little pieces as you can. Faith can get you through a lot of things.”

The left-handed Jamie bounced around several clubs in the mid-1980s before arriving in the Orioles organization in late 1992.

He spent the first part of the 1993 season pitching for the Rochester Red Wings, the then-triple-A affiliate of the club. He was called up to the Orioles in May and went on to win 12 games.

“That may have been one of the biggest crossroads in my career,” Moyer said. “I have nothing but good memories of my time there. The fans were great. I made some great friends. It was a big part of my career.”

One of the Moyers’ daughters, Timoney, was born while he was with the Orioles. At the time, it was the couple’s fourth child. Karen contributed heavily to the Orioles wives’ cookbook, which she said helped raise nearly $1 million for charity.

“We have fond memories of the Baltimore area,” she said. “Those are days we hold in our hearts.”

While in Baltimore, Jamie formed a bond with a boy named Gregory, who had cancer and was receiving treatment at The Johns Hopkins Hospital. Jamie often wrote the boy’s initials on his hat or on the mound. The two have maintained that relationship to this day.

Moyer was released by the Orioles following the 1995 season. He later rose to stardom with the Seattle Mariners, where he was named the team’s most valuable player four times between 1998 and 2003, the same year he reached All-Star status.

Two years ago, he won 16 games and helped the Philadelphia Phillies win the World Series. He now has 258 career wins and some even whisper of a chance at the National Baseball Hall of Fame.

Jamie has loftier goals: to be a man who contributes to as many as possible.

“Baseball isn’t going to last forever,” Moyer admitted. “I want to be remembered in a positive way. I want to give something back. Hopefully, I’ll be giving this city a gift.”