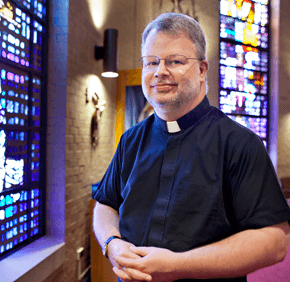 Deacon Ross Edward “Ned” Conklin Jr.
By Elizabeth Lowe
elowe@CatholicReview.org
FULLERTON – Ned Conklin was 8 when he first considered becoming a priest. The notion returned every five years, but he repeatedly dismissed the idea.
“I didn’t talk to anybody about it for a long time,” he said. “I contemplated and observed.”
It wasn’t until decades later that he finally acknowledged God was calling him to the priesthood.
“This isn’t going to go away,” the 49-year-old said to himself. “I need to explore it more seriously.”
Now Deacon Ross Edward “Ned” Conklin Jr. is one of five men who will be ordained to the priesthood for the Archdiocese of Baltimore June 21 during a 10 a.m. Mass celebrated by Archbishop William E. Lori at the Cathedral of Mary Our Queen in Homeland.
Deacon Conklin’s story is out of the ordinary, as the median age of a new priest is 32, according to the U.S. Conference of Catholic Bishops.
Born in Parkville, he was a toddler when his father, a financial planner for IBM, was transferred to Durham, N.C.
In a state where less than 1 percent of the population identifies as Catholic, Deacon Conklin attended kindergarten through sixth grade at a Catholic Montessori school, experiencing daily Liturgy of the Word.
As a senior at a public high school, Deacon Conklin completed an independent study on the history of the Catholic Church as a way to further explore the priesthood.
Secular life
He entered The Johns Hopkins University in Baltimore, where he earned a bachelor’s in engineering in 1987; a master’s in engineering in 1988; and a master’s in applied mathematics in 1992. He worked as an electrical engineer in The Hopkins Applied Physics Lab for 19 years.
Deacon Conklin had decided that if he was not married by age 30, he would explore the priesthood. He got his feet wet with the young adult ministry at his parish, St. Louis in Clarksville. He became a catechist and then a confirmation catechist.
“I really liked being an engineer,” he said. “I said, ‘I can still be an engineer and I can still volunteer at church.’ Then God decided he had other plans.”
About a decade ago, at the end of a year of discernment, Deacon Conklin approached his pastor, Monsignor Joseph L. Luca, about pursuing the diaconate or priesthood.
“I said, ‘Let’s go for priesthood,’ ” Deacon Conklin recalled.
In 2007, Cardinal William H. Keeler, then archbishop of Baltimore, accepted Deacon Conklin, then 42, into formation. Beginning his studies and formation at St. Mary’s Seminary and University in Roland Park, Deacon Conklin’s employer put him on sabbatical for two years.
“It relieved the pressure,” he said.
At Johns Hopkins, his most challenging course was Information Theory, a class he took as a graduate student; at St. Mary’s, philosophy courses were the most obtuse.
“It’s a broadening of the mind,” he said. “The academic side of it wasn’t the challenging part.”
Transitioning from life as a bachelor engineer to seminarian was difficult, particularly living in community, as he had lived alone for more than 20 years.
“Perfectly happy” as an engineer, Deacon Conklin said he would still be one if not for the inevitable pull of a higher power.
“This is what God wants me to be doing,” he said. “It’s not totally up to me. God knows us better than we know ourselves.”
Pastoral touch
Tom Greene, who worked with Deacon Conklin in the Applied Physics Lab from 1988 to 2005, said his friend’s decision surprised him but “it seemed to make sense.”
“He’s always been a man of principle,” Greene said. “I’ve always appreciated that about him. I’ve appreciated his friendship and support over the years and certainly want for him and his parish to thrive as he goes forward.”
Deacon Conklin, who has had more than a half dozen pastoral assignments, has served since May 2013 at St. Joseph in Fullerton. Its pastor has been impressed with his service.
“We’re fortunate to have him be ordained for the archdiocese,” Monsignor Kevin T. Schenning said. “Whatever parish he goes to, he will enrich them.”
In addition to his business and parish life experiences as a lay person, Deacon Conklin will bring compassion to parishioners handling end of life issues, Monsignor Schenning said.
His mother, Barbara, died in 2011 at age 72 and his father, Ross, died in January at age 80. Deacon Conklin preached at his father’s funeral, held at St. Joseph in Cockeysville.
“He can grieve with people,” Monsignor Schenning said. “That’s going to bring a lot to his ministry.”
Deacon Conklin is looking forward to June 21 when he, Deacon James Boric, Deacon Andrew DeFusco, Deacon Joseph Langan and Deacon Canisius Tah will be ordained, marking the culmination of years of training and pastoral work in parishes in the archdiocese.
The men were ordained as deacons May 18, 2013, their final step before becoming priests.
“You’re never ready for it,” Deacon Conklin said, “but to the degree you feel ready, I feel ready.”
He will celebrate his first Mass as a priest June 22 at 12:30 p.m., at St. Joseph, Fullerton.
Also see:
Five men to be ordained priests for the Archdiocese of Baltimore
John Carroll graduate doesn’t let limited eyesight hold her back
Holy Apostles parishioners say a tearful goodbye to their parish
PrevNext