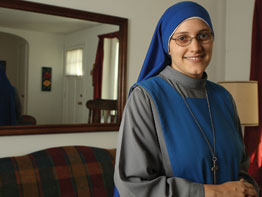 Sister Maria del Fiat Miola was studying abroad in Italy during her junior year at Columbia University when she encountered a group of women at St. Peter’s Square who would change her life.

Wearing simple gray tunics, bright blue veils and flowing scapulars, the women seemed unlike any the Baltimore native had ever met. Coming from all over the globe, they were members of a new women’s religious community called the Servants of the Lord and the Virgin of Matara. They radiated a sense of joy and deep inner peace, and they instantly attracted the young college student.

“They were happy,” remembered Sister Maria del Fiat, who experienced a reawakening of her Catholic faith while in college and often found herself defending church teachings among her classmates and professors.

“They were holy, but they were normal,” she said. “They had a real humanity to them that didn’t scare me. God called me to their order.”

In a joyful Oct. 11 ceremony at the Basilica of the National Shrine of the Immaculate Conception in Washington, D.C., Sister Maria del Fiat professed her final vows as a member of the same community that so deeply touched her eight years ago. She accepted a gold ring, fashioned from her grandfather’s wedding ring, as a symbol of her mystical marriage to Christ.

The Servants of the Lord and the Virgin of Matara order was founded in 1988 by Father Carlos Miguel Buela in Argentina and is affiliated with the Priests of the Incarnate Word. An international missionary order focused on evangelizing the culture, the Servants minister in 23 countries and currently have 750 members.

Sister Maria del Fiat’s first assignment will be teaching Latin and Greek to seminarians and sisters at her order’s university in Segni, Italy. The 29-year-old sister, who holds a bachelor’s degree in classics from Columbia, has already begun her ministry.

The former parishioner of St. Matthew in Baltimore, who speaks Latin, Greek, Italian and Spanish in addition to her native tongue, said she is excited to live out her vocation and share her love of Christ with others. While her decision to become a sister was difficult at first for some of her family and friends, Sister Maria del Fiat said they have been very supportive. Thanks to donations, she was able to pay off $17,000 in college loans in less than two years so she could focus totally on her vocation.

“Three of my non-Christian friends gave me their first paychecks,” she said.

Sister Maria del Fiat, whose baptismal name is Christine, said she is humbled to wear her order’s distinctive habit and a replica of a 1594 cross carved by a member of the tribe of Matara. People of all faiths constantly come up to her to ask questions about Catholicism and the religious life.

“It’s like a magnet,” said Sister Maria del Fiat with a laugh. “That’s the merit of the habit. You are always representing who God is. I remember who I am when I put it on every day. It’s always a constant challenge to live up to what that means.”