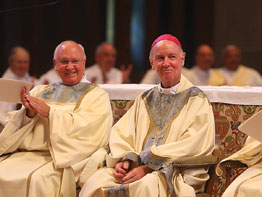 It’s not every day that Bishop W. Francis Malooly is compared to a record-breaking Olympian.

For the hundreds packed inside the Cathedral of Mary Our Queen in Homeland Aug. 17 for a farewell Mass for the soon-to-be-installed ordinary of the Diocese of Wilmington, the comparison was apt.

“This is an opportunity to thank and congratulate our Archdiocesan version of Michael Phelps,” Archbishop Edwin F. O’Brien said to thunderous applause.

The Mass came one day after the versatile Mr. Phelps claimed his eighth and final swimming gold medal of the XXIX Olympic Games. While the Rodgers Forge native was the darling of the sports world, Bishop Malooly was the toast of Baltimore’s Catholic community.

“His stamina, energy, perseverance and his total dedication to his vocation are incomparable among the priests and the bishops of our diocese,” Archbishop O’Brien said.

It was the second local farewell Mass for the Parkville native since he was chosen last month to replace Bishop Michael A. Saltarelli in Wilmington. A third will be held Aug. 24 at 11 a.m. at St. Thomas More in Baltimore, where he has resided for 23 years.

Bishop Malooly, 64, will be installed as Wilmington’s ninth bishop Sept. 8.

“It’s a little ironic the archbishop uses the image of Michael Phelps,” Bishop Malooly said after the archbishop’s remarks. “When I was a seminarian working in our day camp in Sparks (what is now the Monsignor O’Dwyer Retreat House), I was responsible for teaching swimming, which I could not do.

“I could teach it, and I could scare the kids into swimming, but I didn’t know how to swim myself.”

The exchange drew huge laughs from worshipers, many of whom squeezed into the pews for afternoon Mass. The day was long on affection for the man who had impacted many lives in the archdiocese.

“He’s just a beautiful person,” said Linda Sanchez, a member of St. John the Evangelist in Severna Park. “He’s got a presence about him. He just draws people to him.”

Mrs. Sanchez first met Bishop Malooly in the 1970s, when he was an associate pastor of St. Anthony of Padua and she was a parishioner. He presided at her marriage.

Following the farewell Mass, Mrs. Sanchez and her sisters, Cathy Deitz and Janet Nay, stood in a line that stretched hundreds of feet to offer their gratitude. They said that Bishop Malooly was always available for their family, as he performed the last rites for both of their parents, Daisy and Daniel Paska of Severna Park.

“It meant lots,” Mrs. Nay said. “It seemed like mom held on until she talked to him. I think it was a bond both my parents had because he was so kind and caring.”

An hour before Mass, Bishop Malooly began walking to the back of the cathedral to ready for the celebration. Thirty minutes later, he was only halfway down the aisle, because of the sheer volume of people clamoring to talk.

During his homily, Bishop Malooly asked worshipers to stand if he had married, baptized or confirmed any of them. A staggering number rose in response.

Chris Duck, a parishioner of Church of the Resurrection in Ellicott City and a longtime proponent for deaf ministry in the archdiocese, said Bishop Malooly was a powerful ally.

“He’s a very warm, caring person,” Mr. Duck said. “I know he has a lot of things to focus on, being the vicar general and the vicar of the Western Vicariate, but when we requested that he come out for confirmation for the deaf, he came out.”

The Archbishops who counted on Bishop Malooly’s measured advice over the years said he was a sought-after steward.

“I had an opportunity to talk with Bishop Saltarelli … and he intimated to me his hope you would be his successor in Wilmington,” Cardinal William H. Keeler told Bishop Malooly at the close of Mass. “I said, ‘that’s a pretty good hope.’”

Even as Bishop Malooly looked forward to his installation, he looked back on his entire life in Baltimore with fondness.

“I have been blessed to minister to the Archdiocese of Baltimore for 38 years,” he said. “I’ve had the honor of being involved in many of your most special, pleasant, sometimes complex and difficult moments in your life, and that blessing I will always carry with me.”