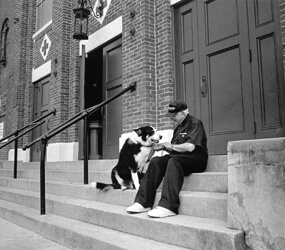 NEW ORLEANS – U.S. Bishop Nicholas D’Antonio, who once headed a prelature in Honduras but found safe haven in the Archdiocese of New Orleans during a Honduran government crackdown on religious activities, died Aug. 1 at age 93.

His funeral Mass was celebrated Aug. 7 at St. Louis Cathedral in New Orleans. Burial was in St. Anthony’s Garden behind the cathedral.

The bishop died at the Chateau de Notre Dame nursing home in New Orleans where he had been living since 2001.

Bishop Nick, as he liked to be called, was born in Rochester, N.Y., July 10, 1916. He was raised in Baltimore and had dreams as a teenager of becoming a professional boxer. But he entered the seminary instead and became a Franciscan priest. He was ordained in 1942 and served 30 years as a missionary in Latin America, learning firsthand the struggles of the poor.

People would come to him writhing in pain from impacted or rotted teeth, and Bishop D’Antonio became the dentist of last resort.

“I used a pair of pliers and would go down the row, bang, bang, bang, pulling out their teeth,” he said in a 1997 interview. “A dentist from Johns Hopkins was so impressed he taught me the technique of tooth extraction, and I was able to give injections. If you help people who are sick, they are so grateful.”

His love for the poor did not endear him to the wealthy landowners in Honduras when in 1963 he was appointed to head the Prelature of the Immaculate Conception of the Blessed Virgin Mary in Olancho, Honduras. He was ordained a bishop in 1966. (The prelature became the Diocese of Juticalpa in 1987.)

After he worked diligently for years to improve the lot of the poor, a $10,000 bounty reportedly was placed on his head.

“I was embarrassed,” Bishop D’Antonio said of the bounty. “I thought they should have offered more than that.”

In 1975, Bishop D’Antonio was in Rome for a meeting when two priests and 12 laypeople were murdered in Olancho for religious activities.

“They threw them into a well 150 feet deep and dynamited it to destroy all the evidence,” Bishop D’Antonio said. “I really felt I should have been there with my people, but the father superior (of the Franciscans) said, ‘Nick, don’t come back.’ I couldn’t go back.”

Bishop D’Antonio found his way to the Archdiocese of New Orleans in 1977 when now-retired Archbishop Philip M. Hannan invited him to serve as vicar general and vicar for Spanish-speaking Catholics. He was assigned as pastor of Annunciation Parish in 1979. He officially retired in 1991, when he turned 75; canon law requires all bishops to turn in their resignation at that age. But he continued to serve at the New Orleans’ parish.

In 1994, Bishop D’Antonio had surgery to remove a brain tumor that had been causing painful seizures. Thirty-two days after the delicate eight-hour operation, the then-78-year-old celebrated Mass, walking briskly up the aisle.

“Can you all believe it?” he exclaimed. “I don’t believe it, but it’s true. I’m here. To tell you the truth, I never thought I would be back. Praise the Lord in heaven.”

He continued to astound parishioners with his energy, working out three days a week at the Loyola University gym after celebrating Mass. He would walk five laps around the elevated track – one lap for each decade of the rosary.

“Bishop Nick is the best,” one parishioner said. “He is so humble. Some bishops are so stiff and formal. He does everything the way Christ did it when he was on earth. He reaches out to everyone – the poor, the hungry. He never says no to anyone.”

He said his daily goal always was to serve the people of God.

“The pope is called the servant of the servants of God,” he said. “So what’s special about a bishop? I have more responsibility. I try to live a moment at a time and ask for God’s grace. I keep in contact with Jesus Christ. I’m praying all day, even when I’m driving in my car.

“If I hit my head, I don’t get mad. I just say, ‘Oh, thank you, God, for letting me hit my head so that I can praise you,’“ he said. “People are all worried about me and asking me to slow down. But I’m so used to doing things.”

Bishop D’Antonio is survived by a brother, John, and three nephews and two nieces, all of Baltimore.