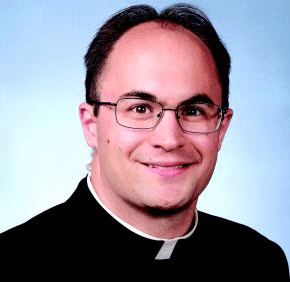 By Elizabeth Lowe
elowe@CatholicReview.org
Twitter: @ReviewLowe
COCKEYSVILLE – Priests are prepared when new assignments are issued that they may relocate to a parish several miles or even several counties away. They may not be as ready to hear they will be transferring to Italy.
That’s exactly what happened to Father Ernest W. Cibelli, a 31-year-old Archdiocese of Baltimore priest ordained four years ago. The associate pastor of St. Joseph in Cockeysville learned he will serve as priest secretary to Cardinal Edwin F. O’Brien, archbishop emeritus of Baltimore and grand master of the Equestrian Order of the Holy Sepulcher of Jerusalem, for a two-year period.
Father Cibelli’s final weekend of Masses at St. Joseph will be June 8-9.
“Being a priest is about serving the Lord,” said Father Cibelli, who was surprised by the appointment. “What’s important is to say ‘yes’ to the Lord when he asks you to do something.”
Cardinal O’Brien was named by Pope Benedict to lead the chivalric order in August 2011 and has been stationed in Rome since May 2012. His previous priest secretary, Monsignor Adam J. Parker, has been named vice chancellor for the Archdiocese of Baltimore.
“He’s a very mature priest who will bring a lot of insight into his new dealings with the Order of the Holy Sepulcher,” Cardinal O’Brien said of Father Cibelli.
Moving to Italy should be a smooth transition for Father Cibelli, who speaks Italian, has studied in Rome and hails from an Italian family. His 98-year-old grandmother lives in Piedmont, Italy, and his father, Gennaro, came to the U.S. as a child.
While in Rome, Father Cibelli, a Mount St. Joseph, Irvington, and Mount St. Mary’s University, Emmitsburg, graduate, will earn his doctor of sacred theology from the Pontifical University of the Holy Cross.
In the Archdiocese of Baltimore, Father Cibelli works to anticipate and be attentive to the needs of parishioners. He said these skills will carry over in his new role when preparing for events, managing the cardinal’s schedule and traveling with the cardinal, among other duties.
“Wherever the church is, he’s (Cardinal O’Brien) visiting to support the Knights of the Holy Sepulcher,” Father Cibelli said. “It’s an honor to be serving the cardinal.”
The bespectacled priest has served at St. Joseph since the summer of 2010 and said he will miss serving in a parish and the youths.
“If the work is important enough, you’re willing to make the sacrifice,” said Father Cibelli.
“The parish will certainly miss him,” said Monsignor Paul G. Cook, pastor of St. Joseph. “I hope when he returns he’ll be able to get back into parish work. That is what the priesthood is about.”
Copyright (c) June 6, 2013 CatholicReview.org
PrevNext