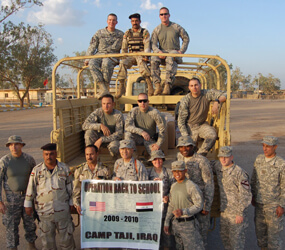 A Baltimore military chaplain serving in Iraq is helping put scarce school supplies into the hands of Iraqi students.

Father Tyson Wood, a U.S. Army major, is one of many Americans involved in “Operation Back to School” at Camp Taji, Iraq – a humanitarian effort to collect enough notebooks, pencils, paper, rulers and other supplies to make 10,000 school kits for Iraqi children.

Thanks to donations from across the United States, a team of volunteers from the Army, Navy, Air Force, contractors and civilians has already assembled more than 2,500 kits and collected 500 soccer balls. More than 5,000 pounds of goods have been donated since the first package arrived in June. So far, 200 school kits and more than 20 soccer balls have been distributed.

“The response from home has been inspiring,” said Father Wood, who responded to questions from The Catholic Review via e-mail from Iraq. “Even in an economic recession, Americans are generous.”

The chaplain, who worked as a mentor to “Operation Back to School” organizers, said children have been delighted by the gifts.

“Educated Iraqi children will lead to an Iraq with a bright future,” he said, “and they will be a helpful neighbor in our global community.”

Father Wood serves in the 1st Air Cavalry Brigade, 1st Cavalry Division. He is a former Lutheran pastor who prepared for the Catholic priesthood at Mount St. Mary’s Seminary in Emmitsburg and was ordained for the Archdiocese of Baltimore in 2005.

Chaplain Chris Weinrich, a U.S. Army chaplain and captain, told The Catholic Review in an e-mail interview from Iraq that the Iraqi military is taking the lead in the distribution of supplies.

“We want the Iraqi military to give a generous face to the people of their nation,” said Chaplain Weinrich, an ordained clergyman with the Assemblies of God. “The events become a huge success when the U.S. and Iraqi forces work together for the benefit of the people in this great country.”

Catholic churches in the U.S. have been very generous to the cause, the St. Louis native said.

“Our country continues to provide the premier standard for giving throughout the world,” said Chaplain Weinrich, who serves with the 1-227th Attack Reconnaissance Battalion, 1st Air Cavalry Brigade. “I believe people want to give because they know the importance of it through their time spent in church.”

How you can help

Kit items should not have any political or religious messages on them, and should not be used. Suggested items include composition notebooks, colored pencils (no crayons), plain folders with pockets, wide-rule paper, blunt-tip scissors, rulers, pencil sharpeners, erasers, zipper pencil pouches and pencils. Pack items in a large 2.5 gallon Ziploc bag. Donations of deflated soccer balls accompanied by a small air pump are also welcome.
Mail via your local post office to:
CH (MAJ) Tyson Wood
1 ACB
APO AE 09378