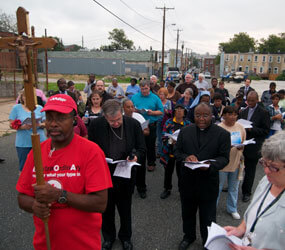 While violence on the streets of Baltimore has taken a toll on many residents, some are using their faith to show that they have had enough.

More than 50 people from local parishes in both Baltimore City and Baltimore County convened at Transfiguration Catholic Community Sept. 27, for a peace walk in the Pigtown community. Led by Missionaries of St. Paul Father Augustine Inwang, pastor of Transfiguration, and Auxiliary Bishop Denis J. Madden, the walk consecrated areas where violence had recently taken place.

“This walk lets people know that they can do whatever they want to do for peace,” said. Father Inwang. “All of this violence brings sadness to your heart – we want to reclaim those places and bless those places.”

Urban peace vigils were spearheaded by Bishop Madden, starting in the summer of 2008. Initially they were done in response to a specific act of violence.

A more proactive approach has been taken this year, with walks taking place about once a month at various city locations. Earlier vigils were held in the communities surrounding St. Ambrose, St. Ann and St. Bernadine, to name a few.

At each stop during the Sept. 27 walk that originated at Transfiguration, Scripture was read, followed by a group prayer and then a prayer of consecration by Bishop Madden. A brief description of the violent act that took place at the location was also given.

All died from their wounds, even more incentive to organize peace walks, according to Bishop Madden.

“We want them (residents) to know that we’re here and that we love them and that we are aware of the crosses they bear,” he said. “The people in these areas lead difficult lives so it’s nice to be here at this hour with them.”

As the walk processed through the neighborhood on a muggy evening, a few onlookers joined in and asked the group to pray for them and their relatives. Father Inwang said it is something that has happened on previous walks.

“The community reaction has never been negative,” Father Inwang said. “Sometimes people walk with us or they ask questions. They have a passionate appeal for peace.”

Bishop Madden agreed, stating that the residents are always appreciative of them going to those specific spots.

“Sometimes the people don’t experience it at the time, but they know they were blessed – people of good hearts came through the community,” Bishop Madden said. “They knew people who didn’t live there were still concerned about their community.”