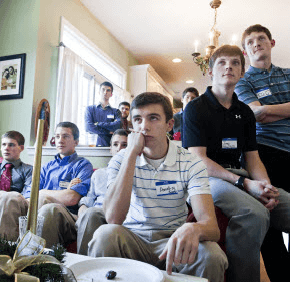 Young men from around the Archdiocese of Baltimore listen as Archbishop William E. Lori talks about his decision to become a priest during a vocations meeting Jan. 5. (Tom McCarthy Jr. | CR Staff)|

“We can think of great things to do,” Archbishop Lori said, “but if you are thinking about being a priest – if that thought is kind of pressing in on you, don’t go off and do this, that and the other thing. My advice is to find out right away.”

Entering the seminary is not irrevocable, the archbishop said. It’s part of a discernment process to discover whether God is calling them to the priesthood.

“As a priest, you are there at every important moment in people’s lives,” Archbishop Lori said. “You bring what no doctor, what no psychologist, what no technician can bring. You bring the truth, the love and the presence of Christ into that situation.”

Archbishop Lori had lunch with the young men and spent several hours answering questions about the priesthood and sharing his own vocation story as part of the archdiocese’s “highways and byways” program that brings the archbishop into homes throughout the archdiocese to promote vocations. It was his second visit to a home since his May 16 installation.

During the program, several priests and seminarians shared their own call to the priesthood. James Boric, a seminarian at Mount St. Mary’s University Seminary in Emmitsburg, said he was inspired to consider the priesthood after he attended the first Mass celebrated by his best friend, Father Patrick Peach.

Boric said he had sought happiness in a successful six-year career working for a Baltimore financial publishing company, but it did not bring the kind of happiness he saw in his friend.

David Downs, a 15-year-old home-schooled parishioner of St. John, Westminster, said he attended the gathering to help him figure out what God wants him to do with his life. He is open to the possibility of becoming a priest.

“I like to come to these kinds of things because you see that priests are regular people,” he said. “It’s not like they are in a different world.”

Samuel McCarthy, a 17-year-old student at Christiana Homeschool Academy in Westminster and also a parishioner of St. John, said most teens of his generation are indifferent to the priesthood or turned against it.

“I know there are a lot of popular comedians who make fun of priests amongst my generation,” he said, “but, as a whole, the Catholics of my generation have great respect for priests and a great love for them.”

Father Michael A. DeAscanis, archdiocesan vocations director, said there are currently 30 men in the seminary studying for the Baltimore archdiocese. He encouraged those who participated in the lunch to pray that God will show them his will for their lives and help them to desire that will.

“We see the dwindling number of priests and we know we need more,” said Maria McCarthy, one of the hosts of the event. “If there are no priests, there are no sacraments.”