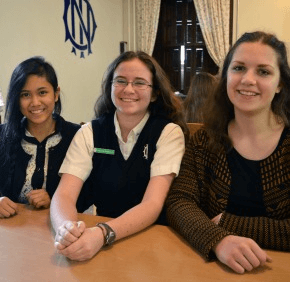 By Jessica Marsala
jmarsala@CatholicReview.org
During the last two weeks of March, Lena Elsayed ate tacos, swung a baseball bat, and visited New York City and Washington, D.C. – new experiences all.
Elsayed and 16 of her peers from Schulzentrum Friesgasse, a co-ed school in Vienna, recently spent 10 days in Baltimore – guests of the Institute of Notre Dame. The exchange students were in IND classrooms March 24-28, and began a three-day visit to New York City March 31.
The sister schools are both sponsored by the School Sisters of Notre Dame.
“The purpose of their trip is to see what American culture is like and to be in an English-speaking school,” said Shannon Pinder, executive assistant to IND president Dr. Mary Funke.
Pinder coordinates the local logistics of a cultural exchange program, in its third year, which this year had Mercy High School and Archbishop Curley High School in Baltimore and Loyola Blakefield in Towson also hosting students from the Austrian school.
Pinder does everything she can to “help fulfill the (American) fantasy” for the visiting Austrians, even if that means that they traveled to Washington March 29 in yellow school buses, rather than the coach buses she rented last year.
“Everybody was upset, disappointed,” Pinder recounted, as the Austrians explained to her their perception that, “In America they ride on yellow buses.”
The Austrians also discovered that IND students begin their days much earlier, have more flexibility in terms of the subjects they can take and have less time between class periods.
The girls from Austria and five chaperones were guests in the homes of IND students and staff.
IND sophomore Marlette Sandoval taught her guests, Lea Tomaszkiewicz, 16, and Charlie Calura, 15, about archery and the cuatro, a Latin American guitar that she has been learning.
Sports are not offered as an extracurricular activity in European schools, and Elsayed raved about stepping into a batting cage for the first time.
“It was so, so cool,” the 16-year-old said. “This experience was just so great. It was a great feeling.”
Other guests sampled steamed crabs, Buffalo wings, Berger cookies and American-sized portions at The Cheesecake Factory.
“It’s giving them a glimpse of being an IND student inside the classroom and out,” Pinder said.
Four IND students will visit their sister school June 12-23 to experience both Friesgasse’s classroom and European culture. In addition to Austria, they will visit Germany and the birthplace of Blessed Theresa Gerhardinger, foundress of the School Sisters and IND.
Eleven IND students visited Austria, Hungary and Slovakia last year, taking in the opera, palaces and salt mines.
Sandoval, the IND sophomore, was among the students who made that trip.
“We were all talking and laughing, and it wasn’t awkward,” she said of interaction with her hosts. “I expected it to be really quiet and nobody talking to anybody because none of us knew each other.
Sandoval said the cultural exchange program has “definitely been a learning experience.”
“I love that it’s continued,” she said. “That really impresses me that it’s going to keep on growing, maybe to other SSND schools around the world.”
Also see:
Archdiocesan statement regarding allegation against high school teacher
Loyola University chemistry/bio major donates $1.5 million
PrevNext