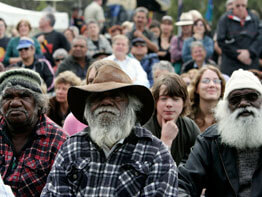 CANBERRA, Australia – Members of Parliament and visitors gave Australian Prime Minister Kevin Rudd a standing ovation after he made a long-awaited apology to Australia’s Aboriginal peoples.

Rudd spoke of the “profound grief, suffering and loss” experienced by an estimated 50,000 indigenous people over 70 years of government assimilation policies predicated on separating Aboriginal and Torres Strait Islander children from their families and homes. The indigenous peoples of those decades are now referred to as the Stolen Generations.

Separated from their families, the children were raised at church-run missions and sent into the work force as farm laborers and domestic help. Many did not know their original identity or where they came from. Their stories of generational dislocation and loss were collected in “Bringing Them Home,” a government-mandated human rights report published in 1997.

That report’s recommendations were a blueprint for reconciling the past mistreatment of Aborigines, beginning with a formal apology from the federal government. But for more than a decade the government of Prime Minister John Howard was, in Rudd’s words, “deafening in its silence.”

Rudd said Australia’s Parliament had passed laws for the forced removal of children on racial grounds, “a practice that continued into the early 1970s.”

“We apologize for the indignity, the degradation and the humiliation these laws embodied,” he said.

Hailing the apology as “historic and prophetic,” the president of the Australian Catholic Bishops’ Conference, Archbishop Philip Wilson of Adelaide, said the issues of “entrenched disadvantage” for indigenous Australians required “full consultation and collaboration with (indigenous) communities,” and “appropriate resources must be made available to achieve real outcomes.”

“For true healing to take place we must acknowledge that this national apology is not a point of arrival, but a point of hope and a point of departure,” he said.

Archbishop Barry Hickey of Perth, chairman of the bishops’ Commission for Relations With Indigenous and Torres Strait Islander People, told Sydney’s The Catholic Weekly newspaper that the apology would “free up the emotional logjam” and help Aboriginal people, as individuals and groups, to approach their future with greater optimism and determination.

“The general population has been far ahead of its political leaders on this matter, just as the people were on the 1967 referendum which granted full citizenship to Aboriginal people,” Archbishop Hickey added.

Before his speech, Rudd said he had consulted with an Aboriginal woman, now in her 80s, who at age 4 had been forcibly taken from her mother by “the welfare men” at Tennant Creek in the Northern Territory.

“She remembered her mother clinging to the side of the truck, with tears flowing down her cheeks as it drove off. She never saw her mother again,” Rudd said.

Later, in Alice Springs, a change in government policy handed over the children’s welfare to church-run missions, Rudd said.

“The kids were lined up in three lines. Those on the left were told they had become Catholics, those in the middle, Methodist, and those on the right, Church of England,” Rudd said.

When the prime minister asked the 80-year-old woman what she wanted known of her story, he said she replied: “All mothers are important. Families, keeping them together is very important. It’s a good thing that you are surrounded by love and that love is passed down the generations – that’s what gives you happiness.”

Rudd said that if indigenous people accept his apology “in the spirit of reconciliation” in which it is offered “we can today resolve together that there be a new beginning for Australia.”

“It’s not sentiment that makes history; it’s actions,” said Rudd. “The challenge now is to build a bridge between indigenous and nonindigenous, with concrete targets.”

He proposed a joint policy commission to bring about “effective housing for indigenous communities and new approaches to enduring problems” based on “flexible, practical local objectives.”

He also promised that indigenous children living in isolated communities would be given preschool education in math and reading. He further pledged his government to close the “health gap” between indigenous people and the rest of the Australian population within the decade.