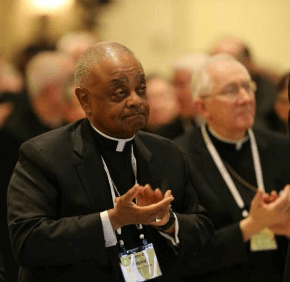 By Paul McMullen
pmcmullen@CatholicReview.org
Twitter: @ReviewMcMullen
Three months after he encouraged his fellow bishops during their fall assembly in Baltimore to advance racial harmony, Atlanta Archbishop Wilton D. Gregory will return to Charm City to provide the opening keynote address at the fifth annual Mid-Atlantic Congress for pastoral leaders.
The event’s sponsors include the Archdiocese of Baltimore. With a theme of “Blessed as Living Witnesses,” it runs Feb. 16-18 at the Hilton Inner Harbor.
To the north sits St. Peter Claver Church in Sandtown-Winchester, where the U.S. Conference of Catholic Bishops celebrated the opening Mass of their 2016 fall assembly in November. The neighborhood was the focal point of unrest in spring 2015.
“Archbishop (William E.) Lori and I were in cahoots in getting the Mass (there),” said Archbishop Gregory, past president of the USCCB. “It was received as a warm affirmation of the church’s commitment to racial justice and the healing that needs to go on, as well as a gesture of affection to the community.
“It was a pivotal moment, not just for me, but the entire body of bishops. I had a number of my brother bishops approach me and say, ‘Wilton, this was good for us.’ ”
Like Archbishop Lori, Archbishop Gregory was among the archbishops who wrote columns for Catholic News Service on key issues facing the church and the new Trump administration, his titled “Racism is a disease that must be cured.”
Archbishop Gregory told the Review that his MAC address will reference “Laudato Si: On Care for Our Common Home,” Pope Francis’ encyclical on the environment.
“There is so much there, about the inter-relatedness of creation and our role, as human beings, in being caretakers of God’s creation,” he said. “We’re God’s creation, made in his own reflection. That makes it important for us to love one another, to treat one another with holy reverence.”
Other keynote speakers include Carmelite Sister Regina Marie Gorman, a sought-after retreat leader and vicar general of the Carmelite Sisters of the Most Sacred Heart of Los Angeles; Hosffman Ospino, an assistant professor at Boston College’s School of Theology and Ministry; and Joan Rosenhauer, who leads Baltimore-based Catholic Relief Services’ domestic programs and advocacy.
The congress, which includes a Hispanic track, will highlight best practices in evangelization and includes showcase presentations from four organizations which are leaders in the field: Amazing Parish, Renew, the Colorado-based Catherine of Siena Institute and ChristLife, which is based in the archdiocese.
According to Ruth Puls, director of the archdiocesan Department of Evangelization’s Division of Catechetical and Pastoral Formation, MAC participants “come face to face with leaders in their fields, spiritual giants, people who are on fire for the Lord. They leave transformed by the experience.”
Archbishop Lori will celebrate Mass at the MAC Feb. 17, at 5:15 p.m.

Open your heart to that small splendor born in Bethlehem, pope says