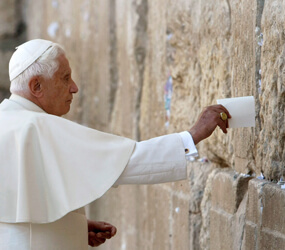 JERUSALEM – Taking a piece of paper, firmly folding it in four and pushing it deep into a crevice of Jerusalem’s Western Wall, Pope Benedict XVI prayed for peace in the Holy Land and respect among believers from every faith.

The pope stood alone in silence for two minutes May 12, facing the massive stones of the Western Wall, a site sacred to Jews because it is what remains of the complex of the Second Temple, destroyed by the Romans in the year 70.

The text of the prayer he left in a crevice began: “God of all the ages, on my visit to Jerusalem, the ‘City of Peace,’ spiritual home to Jews, Christians and Muslims alike, I bring before you the joys, the hopes and the aspirations, the trials, the suffering and the pain of all your people throughout the world.”

Pope Benedict’s prayer asked God to “hear the cry of the afflicted, the fearful, the bereft; send your peace upon this Holy Land, upon the Middle East, upon the entire human family; (and) stir the hearts of all who call upon your name, to walk humbly in the path of justice and compassion.”

The pope ended his prayer with a quote from the Book of Lamentations, “The Lord is good to those who wait for him, to the soul that seeks him.”

Pope Benedict’s private prayer at the wall was preceded by a brief ceremony in which the rabbi responsible for religious services there read in Hebrew from the First Book of Kings, and the pope read Psalm 122 in Latin.

The psalm includes the lines, “For the peace of Jerusalem pray: ‘May those who love you prosper! May peace be within your ramparts, prosperity within your towers.’ For family and friends I say, ‘May peace be yours.’ For the house of the Lord, our God, I pray, ‘May blessings be yours.’“

At any time of the day or night, Jewish men and women can be found praying before the wall, leaving between its enormous stones scraps of paper on which their special prayer requests are written. Some boys celebrate their bar mitzvahs at the wall, and it is not uncommon to see newly married couples, wearing their wedding clothes, praying there.

Despite the supertight security measures enforced throughout Jerusalem for the pope’s visit, a section of the wall remained open for Jews wanting to pray.

After visiting the wall, Pope Benedict traveled less than a mile to the offices of the Chief Rabbinate of Israel, the body that governs Jewish religious affairs in the nation.

Meeting with Israel’s two chief rabbis as well as rabbis from around the country, the pope used the occasion to reaffirm the fact that “the Catholic Church is irrevocably committed to the path chosen at the Second Vatican Council for a genuine and lasting reconciliation between Christians and Jews.”

As “Nostra Aetate,” the council’s declaration on relations with other religions affirmed, “the church continues to value the spiritual patrimony common to Christians and Jews and desires an ever deeper mutual understanding and respect through biblical and theological studies as well as fraternal dialogues,” he said.

Welcoming the pope, chief Ashkenazi Rabbi Yona Metzger thanked Pope Benedict for making it clear that Bishop Richard Williamson, a member of the Society of St. Pius X, must publicly renounce his denial of the extent of the Holocaust before he can function as a Catholic bishop.

“God is compassionate and expects us to love and respect one another, even if we are from different religions,” the rabbi said.

He also thanked the pope for a document he said he had received that morning promising that the Catholic Church would not conduct missionary activity among the Jews.

Jesuit Father Federico Lombardi, Vatican spokesman, told reporters later he was not sure what document the rabbi was talking about, but that in the meeting room there were copies of all of the statements published by a Vatican-sponsored dialogue with representatives of the rabbinate over the past nine years.

Since Pope John Paul II’s visit to Jerusalem in 2000, the Pontifical Commission for Religious Relations With the Jews and the Chief Rabbinate have sponsored an annual dialogue session.

Pope Benedict told the rabbis his visit was an opportunity to thank God for the progress made in the dialogue and for the willingness of participants to discuss not only what they have in common, but also their differences.

The dialogue has shown that “Jews and Christians alike are concerned to ensure respect for the sacredness of human life, the centrality of the family, a sound education for the young and (for) the freedom of religion and conscience for a healthy society,” the pope said.

Both Jews and Christians, he said, are worried about “moral relativism and the offenses it spawns against the dignity of the human person.”

The pope told the rabbis he was confident Catholic-Jewish cooperation would continue to grow in the future, including in “decrying hatred and oppression throughout the world.”

“I pray that God, who searches our hearts and knows our thoughts, will continue to enlighten us with his wisdom so that we may follow his commandments to love him with all our heart, soul and strength and to love our neighbor as ourselves,” he said.

As a gift, the rabbis gave the pope a small sculpture depicting men praying before the Western Wall.