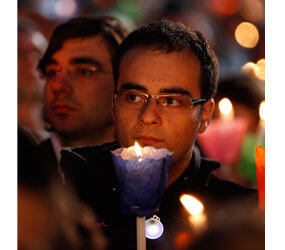 ROME – With songs, videos, testimonials and prayers, Catholics of every age and many countries gathered in Rome to remember Pope John Paul II on the eve of his beatification.

“I feel him present here in the Circus Maximus,” the pope’s former secretary, Polish Cardinal Stanislaw Dziwisz of Krakow told the crowd in Rome’s ancient racetrack April 30. “I feel him returning tonight.”

The vigil began with a two-minute video clip of Pope John Paul talking to young people in 2000, struggling at first to find the words and then bantering easily, to the delight of the crowd.

The video set the evening’s tone of remembrance, and it was followed by a torchlight procession to an image of Mary, evoking the late pope’s special devotion to the mother of Jesus. The vigil featured a live satellite link-up to five Marian sanctuaries around the world, including the pope’s former Archdiocese of Krakow, Poland.

Pope Benedict XVI closed the event with a prayer to Mary and a blessing, telecast live from the papal apartment at the Vatican.

The crowd on a wet evening in the Circus Maximus was small at first but swelled to an estimated 200,000, many of whom planned to pray the entire night in preparation for the beatification Mass in St. Peter’s Square the next morning. One of the many homemade banners read in Engish: “Karol, we are here with you.”

Brother Tristan Abbot of the Cayman Islands, a member of the Society of Our Lady of the Holy Trinity, was among those who came to remember and pray. “John Paul II is our hero. He taught us what it is to love. … We want to emulate him. We want to have his courage,” he said.

Lady Joy Okechukwu from Abuja, Nigeria, came to Rome with 41 people from her archdiocese. Asked why she considered Pope John Paul II a saint, she said: “His humility, his kind heartedness, his love for the Blessed Virgin Mary. I love her too.”

Thousands of candles glimmered in the darkness as a Philippines choir sang “Ave Maria.” In an amateur video montage made by Rome students, young people said in simple language what they appreciated about the late pope – especially his spiritual depth and his ability to reach out to all kinds of people.

The crowd cheered French Sister Marie Simon-Pierre, whose cure from Parkinson’s disease was accepted as the miracle that paved the way for Pope John Paul’s beatification. The nun beamed as she recounted her unexpected healing.

She said when she was diagnosed with Parkinson’s in 2001 at the age of 40, she found it difficult to watch Pope John Paul, who suffered from the same disease. “I saw in him the image of my illness. But I admired his strength and courage,” she said.

When the pope died, she felt a great emptiness, as if she had lost someone who could sustain and support her. Two months later, her condition had worsened. Then, after prayers to the late pope, she awoke early one morning feeling well rested.

“I felt something had changed in me, and I was healed,” she said. The crowd in the Circus Maximus erupted in applause.

Earlier, Joaquin Navarro-Valls, Pope John Paul’s spokesman, told the crowd that he would sometimes find the pope kneeling in prayer, surrounded by small pieces of paper, which he would read one by one. They were prayer intentions that arrived by the thousands – relatives of the gravely ill, parents of drug addicts, people looking for answers.

“All the pain of the world came to him. And he nourished his prayer with the needs of the others. I don’t think there was room in his prayer life for his own intentions,” Navarro-Valls said.

Cardinal Dziwisz, the pope’s personal secretary for some 40 years, said he knew he was living and working next to a saint – even before his election as pope in 1978.

The cardinal said he could remember only two times when Pope John Paul showed anger. One was during a trip to Sicily in 1993, when the pope vehemently denounced the Mafia in language that surprised even his close aides.

“It frightened all of us,” Cardinal Dziwisz recalled.

The other time he saw the pope angry, he said, was just before the start of the U.S.-led war against Iraq in 2003, when the pope publicly warned that military action would never resolve the problems. “He was right,” Cardinal Dziwisz added.

The vigil included recital of the luminous mysteries of the rosary, an innovation of Pope John Paul, led by pilgrims at the five sanctuaries connected via video, in Poland, Tanzania, Lebanon, Mexico and Portugal. The five mysteries were dedicated to intentions dear to the late pope: young people, the family, evangelization, hope and peace among peoples, and the church.

Eight churches in the center of Rome were being kept open all night so that people could pray until the opening of St. Peter’s Square at 5:30 the next morning for the beatification Mass.