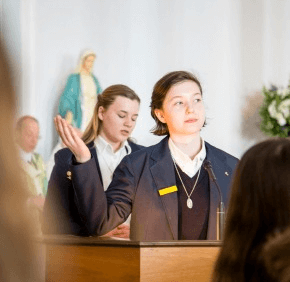 The day’s Gospel reading was Mark 5:1-20, of Jesus saving a man possessed. It led the archbishop to share with 490 students at the all-girls school that “the evil one likes it best when he deny that he exists,” and offer three simple tips on how to counteract the devil by putting “ourselves in Jesus’ path.”

His homily, in the school’s Chapel of St. Francis de Sales, noted prayer, the sacraments and a third way we encounter Jesus, “in one another.”

Seniors Lisa D’Ambrosio and Raeghan Smith appear to already be following that regimen.

D’Ambrosio spent the previous school day, Jan. 27, in Washington, D.C., at the National March for Life, along with approximately 100 other Mount de Sales students. She couldn’t recall if it was her fifth or sixth march, a witness she began as a student at nearby St. Agnes School.

Now a parishioner of Our Lady of Perpetual Help in Ellicott City, D’Ambrosio is the Mount de Sales class of 2017’s recipient of the school’s Guardians of Life Scholarship. She heads the school’s Students for Life.

“We promote pro-life causes,” said D’Ambrosio, of an effort that focuses on the nearby Hillcrest Clinic, where abortions are performed. “Just about every Tuesday, we take a group of students there to pray the rosary and Divine Mercy Chaplet.”

D’Ambrosio, a lacrosse player, will next attend Coastal Carolina University in Conway, S.C.

Raeghan Smith, a parishioner of Our Lady of the Fields in Millersville who came to Mount de Sales from School of the Incarnation in Gambrills, plans to major in global studies or international relations at St. Joseph’s University in Philadelphia or the College of the Holy Cross in Worcester, Mass.

Smith is the type who spends summer vacation in St. Marc, Haiti, with the Baltimore Haiti Project; or joining a group from Holy Family Parish in Davidsonville serving a Zuni reservation in New Mexico.

At the Mass, Smith was the senior class recipient of the “Anchor of the Month” award. Her resume includes being president of the Global Outreach Club at Mount de Sales.

“We want to be the first to advocate for those in need,” Smith said.

It was the second time in five years, Archbishop Lori began Catholic Schools Week with a visit to Mount de sales. His homily acknowledged the role it plays in the formation of its students.

He told them that they are blest to attend a school that “creates a wonderful environment that encourages you to help one another know Jesus and practice your faith. That is one of the main reasons I like to celebrate Catholic Schools Week, and to come here.”

Jeff Hosier, the music director at Mount De Sales Academy, directs its Concert Choir during a Jan. 30 Mass celebrated by Archbishop William E. Lori at the start of Catholic Schools Week. (Olivia Obineme/Special to the Review)

The liturgy was led by freshmen.

Honored guests included Barbara McGraw Edmondson, superintendent of Catholic schools for the archdiocese. Like Father Scharbach, who came to the Archdiocese of Baltimore from the Personal Ordinariate of the Church of St. Peter, she has also been the parent of a Mount de Sales student.