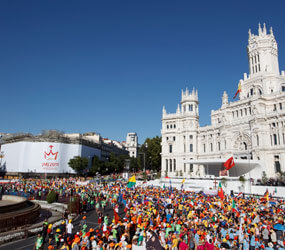 MADRID – A cloudless blue sky turned to inky night as hundreds of thousands of pilgrims participated in the opening Mass for World Youth Day, celebrated by Madrid Cardinal Antonio Rouco Varela in the Plaza de Cibeles.

Protected from the heat by white umbrellas and streams of soft mists, dozens of bishops and priests gathered on and around the makeshift altar to celebrate the Mass for pilgrims representing their homeland with flags, special hats, T-shirts and banners.

In his homily, Cardinal Rouco said World Youth Day is inseparable from Blessed John Paul II, “the pope of the young,” whose memory they celebrated with the Mass. The relationship Blessed John Paul had with the young was “unprecedented,” he said “a hitherto unknown relationship between the church and her young: direct, immediate … imbued with a faith in the Lord Jesus Christ, enthusiastic, hopeful, joyful, contagious.”

This tradition has continued with Pope Benedict XVI, he said, who did not hesitate to highlight Blessed John Paul’s love of the young in his homily for his predecessor’s beatification in May.

World Youth Day inspires a new encounter with the Lord, the cardinal said: “He is the only one who can understand you and lead you to the truth giving life that never ends, to give you happiness, true love.”

Young people are looking for Christ, he said.

“Letting oneself be found by him is the key to the success of any World Youth Day,” he said. “It will be your success. Youths of the 21st century need, even more than previous generations, to find the Lord through the only path that has proven effective spiritually: the humble and simple pilgrim seeking his face.”

In comments following the Mass, Cardinal Stanislaw Rylko, president of the Pontifical Council for the Laity, welcomed the crowd by telling them the event for which they had been waiting and preparing had finally arrived.

“These will be days you will never forget,” he said, “days of important discoveries and decisions that will be decisive for your future.”

Reflecting on the words of St. Paul that form the theme of this year’s World Youth Day: “Planted and built up in Jesus Christ, firm in the faith (Col 2:7),” the cardinal acknowledged the challenge of living out this call.

“This is very demanding because it contains a definite life plan for each one of us,” he said.

“Faith is like a root that is nourished by the lifeblood of the word of God and the sacraments,” he added. “It is the foundation, the rock on which life is built, the dependable compass that guides our choices and gives clear direction to our lives.”

In a world where so many people reject God, Cardinal Rylko said, World Youth Day shows that the Catholic faith lives.

“You have come to say aloud to the whole world – and in particular to Europe, which is showing signs of being very lost – your unwavering ‘Yes!’ ” he said. “Yes, faith is possible. It is, in fact, a wonderful adventure that allows us to discover the magnitude and beauty of our lives.”

For hours before the Mass, pilgrims lined the street. Many played cards, read, wrote in their journals or even napped, waiting for the event to begin.

Oblate Father Richard Hall, pastor of San Juan de los Lagos Parish in San Antonio, said the opening Mass, which united all the pilgrims attending World Youth Day for the first time, was what he and his group of pilgrims had been waiting for.

“To be here, beginning the experience with Mass (is what is) so wonderful about our church,” Father Hall said. “No matter where you’re at, you’re able to celebrate the liturgy in whatever language (you speak) or country you’re from. To come here around the archbishop of Spain with all the bishops in communion with our Holy Father, Pope Benedict XVI, is a great experience.”

“It’s nothing I’ve ever seen before,” said Morgan Simon, 16, of Sydney. “The representations of all the countries around the world – it’s mind-blowing. Everyone’s happy and cheerful. They all want to talk to each other and get to know you and where you’re from and trade things. It’s one of the most amazing things ever.”

“We’re all here for the same reason,” said Leslie Comstock, 23, of St. Mary Parish in Holliston, Mass., who had just finished attaching an American flag to a nearby fence. “We may not be able to speak to each other very well, but the idea is the same. (Mass) is the only way to start.”

Walking down the street arm-in-arm with fellow pilgrims from Bogota, Colombia, Catalina Bamargo said she could not believe that she was living this experience with 3,000 pilgrims from her country – and with hundreds of thousands more from around the globe.

“This is wonderful, we’re excited,” she said. “The church lives.”