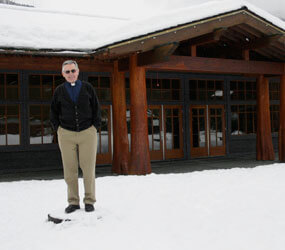 VANCOUVER, British Columbia –- During the 2010 Winter Olympics, most ski runs on the Whistler Blackcomb venue will remain open, and Monsignor Jerry Desmond from Our Lady of the Mountains Catholic Church in Whistler plans to take advantage of the opportunity.

An avid skier, Monsignor Desmond said he does not plan to buy any tickets for Olympic events. However, he is going to strap on his skis and sneak a peek at some of the alpine events like the giant slalom and the super-G.

He plans to take one of the lifts at Whistler Creekside up the mountain to ski down to an ideal spot to watch certain portions of the events.

“I don’t plan to buy any tickets, but I’ll go up the hill to watch the downhill skiers,” he explained. “You can watch the skiers from the top of one of the other runs.”

Monsignor Desmond is also heading up the Catholic contingent for the multifaith center in the athletes’ Olympic Village in Whistler.

“We’re going to have daily Mass at the center and three Masses on Sunday,” Monsignor Desmond said, adding, “confession will be available as need be.”

The Olympic Village buildings, including the multifaith center, are part of Whistler’s newest neighborhood. After the Feb. 12-28 Olympics and March 12-21 Paralympics, the buildings will be converted into housing.

In Vancouver, an interfaith working group is operating a multifaith center in the Olympic Village during the Winter Games and Paralympics.

Pat Gillespie, a member of the interfaith working group, told The B.C. Catholic, newspaper of the Archdiocese of Vancouver, that the center would be “a place for athletes, team members, officials, and the volunteer workforce to come for devotion, Scripture, quiet prayer and other services.”

David Wells, coordinator of the interfaith working group, said the games are periods of stress and high emotion for athletes. He said athletes lean on their faith in these moments in two ways.

“First, those whose faith is a strong part of their life,” he said, “that doesn’t change in competition, and second, those who face a specific challenge and seek counsel, encouragement, and prayer.”

Wells, who has been involved in past Olympics, said athletes grow intensely focused before their competitions and spend time alone.

“During (the event) they may seek prayer or encouragement, and afterward they tend to be more relaxed but often are with family and friends,” he said.

The Ukrainian Catholic Center will be transformed into Ukraine House and will be open to the public for most of the 17 days of the Olympics.

“It’s a chance to indulge in Ukrainian culture and sample the traditional food of the country, including varenyky (perogies), holubtsi (cabbage rolls), borscht (beet soup), and kobasa (kielbasa),” said organizer Mirko Petriw of the local chapter of the Ukrainian Canadian Congress.

The center is on the same property as the Protection of the Blessed Virgin Mary Church, known as St. Mary’s Ukrainian Catholic Church. Divine liturgies will be offered in Ukrainian and English.

Twenty-seven Christian chaplains will volunteer in Vancouver and Whistler; representatives of Buddhism, Islam, Hinduism and Judaism will also serve at the centers.

Pope Benedict XVI has invoked “the abundant blessings of almighty God” on all those involved with the Olympics and Paralympics.

In letters to Archbishop J. Michael Miller of Vancouver and Bishop David Monroe of Kamloops, in whose dioceses the games will take place, the pope sent his good wishes to participating athletes, organizers, and community volunteers who are “generously cooperating in the celebration of this significant international event.”

He recalled how his predecessor, the late Pope John Paul II, said in a 2000 homily that sport “can make an effective contribution to peaceful understanding between people and to establishing the new civilization of love.”

“May sport always be a valued building block of peace and friendship between peoples and nations,” Pope Benedict added.