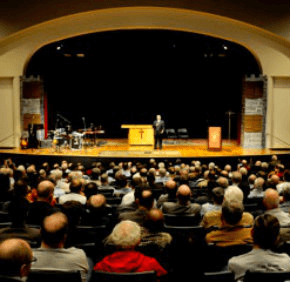 By George P. Matysek Jr.
gmatysek@CatholicReview.org
Twitter: @ReviewMatysek
TOWSON – At a time when secular forces increasingly claim to be the sole voice on the public square, Catholics need to reassert themselves and make their voices heard. They can’t be relegated to the sidelines.
That was the message Washington Cardinal Donald W. Wuerl delivered to nearly 1,000 men who gathered March 29 for the annual Catholic Men’s Fellowship of Maryland Conference, held at Calvert Hall College High School.
“Believers are also citizens,” Cardinal Wuerl said. “We don’t leave our faith locked up in the sanctuary of a church.”
Catholics should be proud of the role they played in the past in advocating for the rights of workers, the improvement of working conditions and respect for human dignity, Cardinal Wuerl said. They should build on that heritage, he said, and confront today’s challenges – among them the respect for human life, the defense of religious liberty and the freedom of conscience.
“I can’t tell you how many times I’ve been told by political figures, ‘We hear from you; we never hear from your people.’ If we are going to impact this culture, the voice of our faith conviction has to be heard,” Cardinal Wuerl said.
Many of the men attending the conference said today’s culture makes it challenging to live the faith. Materialism, sexual license and a focus on individualism are ever-present influences.
“It’s very easy to forget the real things you need to pay attention to – people and people’s needs,” said Clarence Griffin, a parishioner of Sacred Heart, Glyndon. “I use the word ‘deceptive’ to describe the things that the world tells you are good, but are really just distractions.”
Living the faith today requires discernment, according to Bernard Francis, a parishioner of St. Matthew in Northwood.
“In this society, we’ve just got to make choices as men as to where we want to go and how we want to go and how we want to live,” said Francis, an immigrant from Trinidad and Tobago.
Steve Paradela, a parishioner of Holy Apostles in Colorado, heard about the men’s conference while on a business trip to Virginia. He attended to enflame his faith, he said, and was inspired when Cardinal Wuerl noted that through apostolic succession, what the Catholic Church teaches goes back all the way to Christ himself.
“That’s an amazing witness,” Paradela said. “If you believe that, that’s a pretty amazing thing – that the God of the universe passed this on and nothing has been added or subtracted.”
The church is “now telling us it’s time to do our part of the mission,” Paradela said.
During a presentation, Deacon Alex Jones, a convert to the Catholic faith and a former minister in Detroit, told the men that if they deepen their faith, they won’t want to keep it to themselves.
“You’ve got to catch on fire and then our sharing is genuine,” he said. “It’s effortless. You won’t be able to keep quiet. Then society will begin to change when they see that love of God burning in your heart.”
During the daylong conference, hundreds of men stood in long lines for confession. More than 40 priests were on hand to administer the sacrament. Other speakers included Tim Staples, a convert and director of Apologetics and Evangelization at Catholic Answers.
The New Evangelization, what Cardinal Wuerl described as an active invitation to others to join believers in their walk with Christ, was a constant theme. The cardinal said the New Evangelization, promoted by the last three popes, demands that believers be bold and courageous. Disciples who share the faith must be connected to the church and have a sense of urgency, he added. They should also have a sense of joy.
“Smile and maybe someone will want to follow you,” Cardinal Wuerl said.
Archbishop William E. Lori, who celebrated a closing Mass, encouraged the men to be witnesses to Christ.
“I think this gathering is a sign of the Lord’s presence among us, bringing us together,” he said, “urging us with the Holy Spirit to open our hearts to the Gospel and to our vocation to live that Gospel as spouses, as fathers, as men who go out every day into the workplace so that we might evangelize ourselves, our families and our culture.”
Also see:
Pope’s present, designed with wood from Baltimore basilica, puts religious liberty in spotlight
Movie execs find ‘big challenge’ in taking ‘fresh look’ at Noah’s story
PrevNext