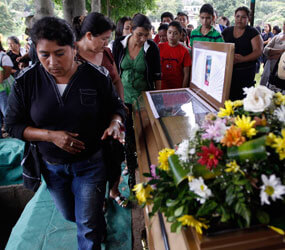 For the first time, priests and seminarians, religious and lay Catholics met to talk about social challenges in Kaifeng and ways to intensify community life among the diocese’s 30,000 Catholic faithful.

As a news item, this was hardly a blip on the radar. But it was a reminder that for much of the universal Catholic community, church life is not all sex abuse, all the time.

The Fides bulletin, produced in an office of the Congregation for the Evangelization of Peoples, offers a small window on the world of Catholic diversity. News from missionary territories in recent weeks shows that even in the doldrums of summer, when the Vatican goes to sleep, exciting things are happening elsewhere – sometimes in unexpected places.

Take China, for example. Over the past few months, Fides has run a string of articles spotlighting the activities of Catholic communities on the mainland: the profession of new religious vows, formation courses for young people, graduation ceremonies for seminarians and the ordination of new priests.

It also published a report on the release of a bishop after 15 months of detention. But the interesting thing is that the Fides coverage of China is focusing not on political developments but on the day-to-day life of Catholic faithful. That means information is increasingly getting through from Chinese dioceses to the universal headquarters in Rome.

China is just one of the missionary countries closely monitored by the Vatican. Assuming that Vatican officials read their in-house newsletter, they would have learned much about international church affairs in recent weeks. In many cases, local church communities have been on the front lines of delicate social issues:

– In India, church leaders issued an alert against the proliferation of extremist Hindu groups after a priest who has been a local church spokesman received a death threat.

– In Thailand, representatives of Asian bishops’ conferences met with Vatican officials for a broad discussion on the future of interreligious dialogue with eight major religions in the region.

– In the Philippines, bishops called on President Benigno Aquino III to curb the foreign exploitation of mineral resources – prompting strong criticism by the country’s mining industry. The bishops also warned against a “contraceptive mentality” in government health and education programs.

– In Sri Lanka, the church has intervened with the European Union against an EU plan to suspend preferential trade agreements as leverage toward a better human rights performance by the Sri Lankan government. Catholic leaders support an improved human rights record, but say the move will hit Sri Lankan workers and poor people the hardest.

– In Congo, church leaders gathered to promote specific new steps toward a durable peace, including a more prominent role by the international community.

– Bishops from Portuguese-speaking countries met in West Africa to launch a new program of cooperative personnel exchanges, particularly in seminaries.

– In El Salvador, the Catholic Church is strongly supporting legislation to increase punishment for participation in “death gangs” that have attacked public transport vehicles in recent months, leaving some passengers burned alive.

– In the Dominican Republic, bishops have denounced a frightening escalation of violence in the country, some linked to drug trafficking, and called for an examination of personal and institutional behavior.

Other Vatican news organs, including the Vatican newspaper, are also doing a better job covering the world outside Italy – a policy line pushed by Pope Benedict XVI.

The issue of L’Osservatore Romano July 18 was typical: front-page stories from Brussels, Mexico City and Beijing, with news inside on church developments in Australia, Mozambique, Uganda, Eritrea, France and Kyrgyzstan. While U.S. affairs are followed closely, on this particular day only two of the newspaper’s 37 stories originated in the United States.