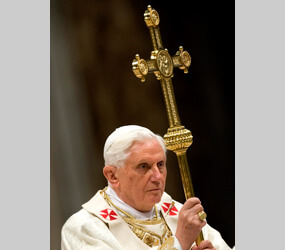 VATICAN CITY – In a sign of solidarity with those struck by a devastating earthquake and a series of tremors and aftershocks, Pope Benedict XVI donated a portion of the sacred oils he blessed to the Italian Archdiocese of L’Aquila.

During a chrism Mass in St. Peter’s Basilica April 9, the pope said he hoped the oils used in the sacraments of baptism, confirmation, ordination and the anointing of the sick would “accompany a time of rebirth and reconstruction and heal wounds and encourage hope” in the city and province of L’Aquila.

“Because of the very serious damage caused by the earthquake, our dear brother, Archbishop Giuseppe Molinari, will not be able to gather with his priests to celebrate the chrism Mass,” the pope said.

“I wish to send these sacred oils as a sign of deep communion and spiritual closeness” to the archbishop and his priests, he said.

L’Aquila’s cathedral was one of countless buildings that were damaged or destroyed by an earthquake April 6, followed by a series of aftershocks in Italy’s central region. The tremors left more than 275 people dead, more than 1,000 injured and tens of thousands homeless.

The pope blessed the oils after they were carried by deacons in large silver urns to the main altar. Catechumens, youths preparing for confirmation, the sick and deacons about to be ordained in the Diocese of Rome wheeled small tables carrying large, artistic urns called “anfore,” which contained the sacramental oils.

The morning chrism Mass was the first of two Holy Thursday liturgies over which the pope was scheduled to preside.

Before blessing the oils, the pope led about 1,600 priests and bishops in a renewal of their ordination promises.

In his homily, he said priests must be men of God, love and truth who courageously challenge the lies present in the world.

Priests, who are immersed in God’s truth and holiness, also must accept “the struggles associated with the truth, because its inmost joy is present within us,” he said.

The pope’s homily was based on a Gospel verse he said he had randomly chosen on the eve of his own priestly ordination 58 years ago. In Chapter 17, Verse 17, of St. John’s Gospel, Jesus is praying to God for his disciples, asking his Father to consecrate or “sanctify them in the truth; your word is truth.”

This prayer of consecration for the apostles is part of Jesus’ establishment of a “new priesthood for the community of the faithful for all times,” said the pope.

Sanctification means giving that person over to God; it is “a taking away from the world” in such a way that the person “no longer belongs to us, or even to itself, but is immersed in God” and becomes God’s property, he said.

This defines the essence of the priesthood in which “a priest is removed from worldly bonds and given over to God, and precisely in this way, starting with God, he is available for others, for everyone,” he said.

Being a priest “is simply a new way of being united to Christ,” the pope said.

However, this new seal can become “a condemnation if our lives do not develop by entering into the truth of the sacrament” of ordination, he added.

“Being united to Christ calls for renunciation. It means not wanting to impose our own way and our own will,” but means abandoning oneself to God so that one may serve him fully, the pope said.

Becoming a priest means renouncing a desire to be independent and a self-made man; it means fulfilling one’s great “yes” to God with many little “yeses” and small sacrifices every day, he said.

“This ‘yes’ made up of tiny steps … can be lived out without bitterness and self-pity only if Christ is truly at the center of our lives,” said the pope.

Jesus’ disciples need to be immersed in the word of God, which is truth, he said.

The pope urged priests to genuinely love and draw nourishment and strength from God’s word so that it purifies and transforms them into God’s own being and shapes their thinking.

He cautioned against letting one’s mind be shaped by what other people say and do and becoming “mired in the superficiality in which people today are generally caught up.”

For priests to be immersed in God’s truth “means to acknowledge that the truth makes demands, to stand up, in matters great and small, to the lie which in so many different ways is present in the world,” he said.

Being immersed in Christ “means being immersed in his goodness, in true love,” the pope said. But “true love does not come cheap” and it often proves quite costly, however “it resists evil in order to bring men true good,” he said.

By becoming one with Christ, people will learn to see him in the poor, the suffering and the weakest in the world, Pope Benedict said.

“Then we become people who serve, who recognize our brothers and sisters in him and in them we encounter him,” he said.

He asked priests, as they renewed their promises, to be “men of truth, men of love and men of God.”