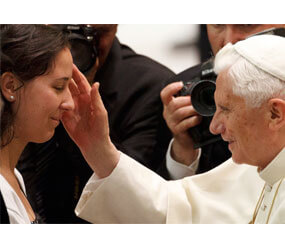 VATICAN CITY – Pope Benedict XVI prayed that a summit of the leaders of countries with the world’s largest economies would find ways to overcome the current economic crisis and promote real development.

At the end of his weekly general audience Nov. 2, the pope issued a special appeal to the leaders of the G-20 nations scheduled to meet Nov. 3-4 in Cannes, France.

“I hope the meeting will help overcome the difficulties, which – on a global level – block the promotion of an authentically human and integral development,” the pope said.

The agenda for the Cannes meeting aimed at finding ways to coordinate economic policies to reduce global imbalances between rich and poor; strengthening the regulation of financial markets; and promoting development in the world’s poorer countries despite the global crisis.

In view of the Cannes summit, the Pontifical Council for Justice and Peace released a document Oct. 24 calling for the gradual creation of a world political authority with broad powers to regulate financial markets, rein in the “inequalities and distortions of capitalist development,” and promote development and the common good.

In his main audience talk, Pope Benedict spoke about the day’s feast of All Souls and the need for Catholics to live in a way that really makes clear their belief in eternal life.

Jesus, “in the supreme act of love on the cross, immersed himself in the abyss of death, conquering it, rising from the dead and opening for us, too, the doors of eternity,” the pope said. “Christ sustains us through the dark night of death, which he himself passed through.”

Pope Benedict said it’s natural that people fear death and the unknown beyond this life. He said that even most people who claim to believe only in what they can prove have a sense that life can’t just end here.

“The human person needs eternity; hope for anything else is too brief, too limited,” he said.

“We cannot accept that everything beautiful and great accomplished during an entire existence is suddenly erased, that it falls into the abyss of nothingness,” he said.

The feeling is particularly strong when it comes to love, which must be eternal; “it is not possible that it is destroyed in an instant,” the pope said.

The Christian belief in eternal life makes sense and allows people to face their own death and the death of loved ones with hope, he said.

The text of the pope’s audience remarks in English is posted online at vatican.va/holy_father/benedict_xvi/audiences/2011/documents/hf_ben-xvi_aud_20111102_en.html.

The text of the pope’s audience remarks in Spanish is posted online at vatican.va/holy_father/benedict_xvi/audiences/2011/documents/hf_ben-xvi_aud_20111102_sp.html.