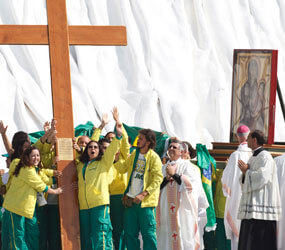 CASTEL GANDOLFO, Italy – After reviewing his trip to Madrid for World Youth Day, Pope Benedict XVI announced the themes he has chosen to guide the reflections of young Catholics next year on a diocesan level and in Rio de Janeiro in 2013.

The theme for the international gathering with the pope in Rio, he said, will be: “Go and Make Disciples of All Nations.”

The pope’s audience with about 2,000 people gathered in the courtyard of the papal villa at Castel Gandolfo lasted just over 15 minutes.

As is customary at the first general audience after a trip abroad, Pope Benedict dedicated his talk to a review of the meetings and experiences of his trip Aug. 18-21 – “extraordinary days” – in Madrid.

“It was a very moving church event,” he said. “Almost 2 million young people from every continent joyfully lived the formidable experience of brotherhood, encounters with the Lord, sharing and growing in the faith.

“I thank God for this precious gift, which gives hope for the future of the church,” he said.

Pope Benedict quickly reviewed the main point of each talk he gave in Madrid and described the atmosphere of each meeting.

He said World Youth Day has proven to be a significant event in the lives of many young people who later pursue a vocation to the priesthood or religious life.

“I am certain that in Madrid, as well, the Lord knocked on the doors of the hearts of many young people so that they would follow him with generosity in priestly ministry or in religious life,” the pope said.

Talking about the World Youth Day vigil the night of Aug. 20, which was interrupted by a storm, pope said the young people “weren’t frightened at all by the rain and the wind” and participated with great devotion and silence in eucharistic adoration.

The pope described World Youth Day 2011 as a “stupendous manifestation of faith” and a special occasion for young Catholics “to reflect, dialogue, exchange positive experiences and, especially, to pray together, and to renew their commitment to living their lives rooted in Christ, the faithful friend.”

Pope Benedict promised he would “continue to accompany them with prayers so they would remain faithful to the commitment they have made.”

The text of the pope’s audience remarks in English is posted online at www.vatican.va/holy_father/benedict_xvi/audiences/2011/documents/hf_ben-xvi_aud_20110824_en.html.

The text of the pope’s audience remarks in Spanish is posted online at www.vatican.va/holy_father/benedict_xvi/audiences/2011/documents/hf_ben-xvi_aud_20110824_sp.html.