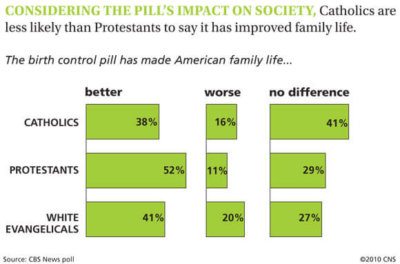 WASHINGTON – Fifty years ago this May, the Food and Drug Administration gave its approval for the use of a combination of the hormones progesterone and estrogen that the pharmaceutical company Searle said would prevent pregnancy 99.7 percent of the time.

Known simply as “the pill,” it was a development that was heralded as the liberation of women from male domination that would lead to fewer divorces and a steep decline in the number of unwanted pregnancies and in the number of abortions. But statistics show just the opposite.

“It’s very easy to find summaries from that time of everything that was promised,” said Helen Alvare, an associate professor of law at George Mason University School of Law in Arlington, Va.

“There would be greater equality for women; they would no longer be essentially slaves to their biology,” she added. “(The pill) was supposed to reduce unwanted births and the number of people looking for abortions and to increase the well-being of children, because only wanted children would be born.”

But it didn’t turn out that way.

In a talk called “Contraception: Why Not?” that has been reprinted or downloaded more than a million times since it was first delivered in 1994, moral theologian Janet Smith said “it was not a stupid expectation” in the 1960s “that contraceptives would make for better marriages, fewer unwanted pregnancies, fewer abortions.”

There are plenty of statistics that prove her point:

– As the use of the pill became more widespread, the divorce rate doubled from 25 percent of all U.S. marriages in 1965 to 50 percent in 1975. Only when the United States had reached the point that all women who wanted access to the pill had gotten it did the divorce rate level off, Smith contends.

– Although the percentage of pregnancies that were “unintended” in 1960 is hard to pinpoint, 6 percent of white children and 22 percent of black children were born out of wedlock that year, Smith says. By the mid-2000s, one-third of white births, 70 percent of black births and half of Hispanic births were to unwed mothers. The National Campaign to Prevent Teen and Unplanned Pregnancy says more than 3 million of the 6.4 million pregnancies in the United States annually are unplanned; about 1.2 million of those result in abortions each year.

– Although abortion did not become legal throughout the United States until 12 years after the advent of the pill, the availability of birth control has not reduced abortions, which totaled more than 45 million between 1973 and 2005. The number of abortions slightly decreased each year in the 2000s, but few credit the pill for the decline. The Guttmacher Institute says about 54 percent of women who have abortions used a method of contraception during the month they became pregnant.

– The well-being of children has declined by a variety of measures, from depression to diet to the number living in poverty and the number experiencing child abuse or neglect, according to the Federal Interagency Forum on Child and Family Statistics.

The belief persists, however, that the pill has had a positive influence on the lives of children, families and especially women.

Fifty-six percent of respondents to a CBS News poll in early May said they thought the pill had improved women’s lives, although men (59 percent) thought so more than women (54 percent) did.

The margin of error for the CBS News poll was plus or minus 4 percentage points.

Alvare, who served for many years as the U.S. bishops’ chief pro-life spokeswoman, believes that the achievements women have made toward obtaining equal treatment with men have “nothing to do with the chemicals they’ve swallowed.”

Even though women today might have “access to places and positions that once belonged to men,” that “isn’t a full measure of women’s equality and dignity,” she added. “They are now in all the places where men were, but they have never been seen more as sex objects than they are now.”

The major disconnect caused by the arrival of the pill has been a loss of “the idea that men and women make babies,” Alvare said. “In any literature today about sex, it seems that unprotected sex makes babies” or even that technology can make babies apart from any human connection.

“That whole package of love, the intimate sharing of life was broken apart by the pill,” she said. And as technological advances in artificial reproduction are made, “the idea that God plays a role in procreation” is lost in favor of the idea that “technology does or the failure to use it does,” she added.

The Catholic Church’s teaching that artificial birth control is morally wrong was reaffirmed by Pope Paul VI in 1968 in the encyclical “Humane Vitae (“Of Human Life”).

Writing recently in a blog for the Ontario-based National Post, Canadian writer Barbara Kay said the pill “coincided with, and arguably caused, the greatest paradigm shift in relations between the sexes in all of human history.”

In the 50 years since its arrival, Kay said, “we have hardly even begun to take an honest cultural measure of what has been gained and what has been lost in the transition.”