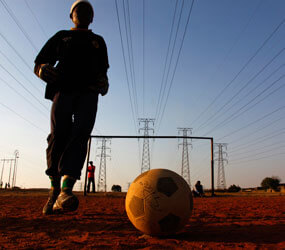 DURBAN, South Africa – Although World Cup fever is sweeping South Africa, some Catholics are skeptical about its long-term effects. The German Catholic news agency KNA visited South Africa to talk to people about their expectations for the 64 soccer matches that begin in the country June 11.

First Stop: Durban. Here’s where the German team will play Australia in its first match. Durban is also home to the St. Philomena’s Catholic child protection center. Jeffrey, Zinhle, and the other boys and girls living here – largely AIDS orphans or abused and traumatized children – are kicking a ball around every free minute and looking forward to the big soccer tournament.

“The World Cup is a present to South Africa, because the world believes in us,” says the center’s director, Patrick Vorster. The existence of poverty, AIDS and violence are going to cause problems, the psychologist and theologian said, but added, “we’ll patch things together and show the world that we can do it.”

Less optimistic is Vorster’s former foster child, Zanele Mambo. The 24-year-old has been HIV-positive since she was raped at age 9. In her book, “They Call Me Smiley,” and through her work on the streets of Durban, she aims to give courage to those who are struggling.

Mambo complains about the “brutal and ruthless” behavior of the police against the city’s many street children.

“They’re herded into buses and taken far, far away, just so that World Cup tourists won’t have to see the suffering that’s on the streets,” she says.

But the children do not have any other way to survive, so they always come back. For Zanele, the World Cup makes everything “just even worse.”

Second Stop: Pretoria. Soccer and belief, it all fits together, according to churchontheball.com, a website of the Southern African Catholic Bishops’ Conference that promotes its own World Cup prayers and church offerings for tourists. It explores the land beyond the stadium and church work in places such as an AIDS hospice.

Father Chris Townsend and his colleagues have even created a soccer prayer book. South Africa is a soccer country, he says, and the enthusiasm for playing ball has taken on almost religious qualities. The church, he says, needs to make it clear that “there are more important struggles than a soccer competition.”

In Pretoria, the optimism surrounding the World Cup is particularly strong. Official estimates speak of almost 130,000 new workplaces created by the tournament, as well as other huge gains for the economy. That’s not to mention an image boost for the country, and the entire continent, if everything runs smoothly.

But what will be left after the blow of the last referee’s whistle? Not much, worries Holy Family Sister Shelagh Mary Waspe, a human rights expert for the Southern African Catholic Bishops’ Conference.

“How quickly will the new World Cup jobs disappear? Will only the rich profit once again? Will the poor remain once more on the outside? I see huge risks,” she says.

Third Stop: Nkandla, a small town in the pristine hills of KwaZulu-Natal province. This is where a German missionary and physician, Franciscan Sister Ellen Lindner, directs a foster care home, as well as a hospital run by the Franciscan Sisters of the Holy Family. She cares mostly for AIDS orphans, disabled children and other minors who have been abused or abandoned.

The unemployment rate in this region is 90 percent. Up to 40 percent of all residents have been diagnosed with HIV or AIDS. Still, Sister Ellen observes, “particularly black South Africans are into soccer. The World Cup has triggered an enormous rise in energy levels.”

Fourth Stop: Khayelitsha, one of South Africa’s fastest-growing townships – 1.5 million people live here, on the outskirts of Cape Town. Children engage in a soccer tournament on an uneven patch of lawn, surrounded by dilapidated housing. The highlight of an otherwise lackluster day, the tournament was organized by the soccer relief project, Youth Unlimited, which receives funding from the German Catholic relief organization, Missio. Youth Unlimited is part of a larger initiative, Club of Good Hope.

“Soccer can be a healing experience,” says Club of Good Hope organizer Wayne Golding. “The children enjoy themselves for a change. They celebrate successes that are usually missing in their lives, and they get used to following rules.” Moreover, they get to experience a few of the joys of a normal childhood, which they’ve never been able to have.

Fifth Stop: Cape Town, a few miles down the road. Dream beaches, deluxe shopping malls, and the majestic view of the city’s magnificent Table Mountain – and smack in the middle, poverty, drug use, violence and gang fighting. The Salesians’ Don Bosco youth center provides free education and job training to former gang members, street kids and delinquents. The small soccer field in the courtyard represents a fundamental place of instruction: Learn to live – in the most literal sense.

“It seems like members of the elite will benefit the most,” she says. Poor South Africans and her juvenile clients won’t be able to afford tickets, nor will they get jobs.

“Most people care mostly about what’s going to happen during the Cup, whereas I am more concerned with the aftermath,” Burroughs says.