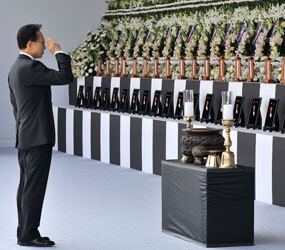 South Korea’s president raised the stakes in the standoff by slashing trade to communist North Korea in retaliation for a torpedo attack by the North that killed 46 South Korean sailors. North Korea accused the South of a smear campaign and said May 25 that it would sever all ties with the South.

“With Christian faith, we view this as another ordeal on the way toward national reconciliation and we must keep hope. We need to pray for peace and reconciliation,” said Fabiano Choi Hong-jun, chairman of the Catholic Lay Apostolate Council of Korea.

He said the tensions have thrown cold water on efforts for national reconciliation.

The sinking of the South Korean warship Cheonan March 26 in the Yellow Sea was the country’s worst military loss since the 1950-53 Korean War. An international team of investigators determined a torpedo from a North Korean submarine sank the ship.

Father Raphael Seo Jong-yeob described South Korean President Lee Myung-bak’s decision to enact economic reprisals against the North as “regretful,” observing that the bishops’ Committee for the Reconciliation of the Korean People had planned much aid to North Korea, but had to cancel it. He welcomed the president’s decision to exclude North Korean children from the aid embargo.

South Korea has been the North’s second-largest trading partner, after China.

Father Seo said North and South Korea “must continue to talk about peace and reconciliation” and that is why “prayers are needed earnestly.”