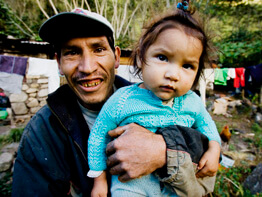 LIMA, Peru – A team of U.S. and Peruvian researchers was investigating glaciers in the remote Andes Mountains of central Peru when a two-day general strike in the region was called to protest government economic policies.
As they tried to return to the city they were using as a base, the researchers were stopped by angry protesters, who on seeing their pickup truck mistook them for mining company employees and broke their windows with rocks.
The incident was one of many around Peru in mid-July, as teachers, farmers and others took their discontent to the streets, especially in the country’s southern highlands. Protesters’ roadblocks halted traffic, interrupting food shipments to cities, and tourists were frustrated by demonstrations that blocked the route to some of the country’s major attractions.
Despite six years of steady economic growth, mainly from the export of minerals such as gold and copper, most Peruvians, especially those in rural areas, say they are not feeling the benefits.
The same scenario is playing out around Latin America, the region of the world with the greatest income disparity. As the region’s bishops pointed out in May during the Fifth General Conference of the Bishops of Latin America and the Caribbean in Aparecida, Brazil, the world’s most Catholic continent is also the most unequal.
In Latin America, 200 million people live in poverty – 81 million of them in extreme poverty – but the economy has posted gains in eight of the last nine years. Since 2004, Latin America’s economy has grown at between 4 percent and 6 percent annually, largely because of the high prices of minerals and petroleum on world markets.
And while the increase in poverty rates has slowed, “that doesn’t mean we’re moving into a stage of development,” said Rodrigo Guerra, head of the Social Observatory of the Latin American bishops’ council.
Inequality between rich and poor is increasing “rapidly and dramatically,” Guerra told journalists during the Brazil conference. “In Latin America, a pending task remains the distribution of wealth.”
Ecuador’s gross domestic product has nearly doubled since 1998, largely because of petroleum exports, but the wealthiest one-fifth of the population takes home more than half the income, while the poorest one-fifth accounts for less than 4 percent.
Similar disparities are found in Brazil, Bolivia, El Salvador, Honduras, Mexico, Panama, Peru and Paraguay.
While there always has been a gulf between rich and poor, the huge differences are more obvious now. Television beams images of wealthy lifestyles into shantytowns, and the people who live in those shacks have relatives and friends who clean the homes or care for the children of families in the United States, Spain, Italy or Japan.
“People feel that they’re not getting their fair share of the wealth that they see,” said Michael Shifter, vice president for policy at the Washington-based Inter-American Dialogue and a professor at Georgetown University. “Even though their condition may be getting better modestly, they see other people who are getting very rich. There’s a lot of pent-up frustration.”
In Peru, the resentment has taken the form of protests. In other countries, it has resulted in the election of outsider presidential candidates who promised a change from politics as usual.
Venezuelan President Hugo Chavez is often held responsible for the election of other left-leaning heads of state, such as Ecuadorean President Rafael Correa, Bolivian President Evo Morales and Nicaraguan President Daniel Ortega, but Shifter said the blame is misplaced.
“Morales and Correa and others would exist with or without Chavez,” Shifter told Catholic News Service. “They are all products of particular circumstances and the situation in each country.”
Shifter warned that ignoring those circumstances could lead to greater unrest.
“Many economists say the problem is not the income gap, the problem is reducing poverty,” he said. “But the gap is important for political reasons. It makes people unhappy and it threatens to undercut the progress that’s been made.”
Amid the statistics, it is often easy to forget that the numbers have a human face – the new faces of Christ, as the bishops put it at their meeting in Brazil.
One is that of Esther Tordoya, a young single mother of two in Lima who has repeatedly seen savings of several hundred dollars wiped out when her children fell ill and needed antibiotics. She is hoping that a relative who is working in Spain will be able to obtain a work contract for her so she also can emigrate.
Poverty, the income gap and the resulting migration and fragmentation of families were recurring themes at the bishops’ conference in Brazil. In their final document, the bishops warned about this downside of globalization.
“It is no longer a matter just of exploitation and oppression, but something new,” they wrote. “It cuts to the root of people’s sense of belonging to the society in which they live, for they are no longer at the bottom, on the margins, without power; they are left out. The excluded are not only ‘exploited,’ they are ‘leftover’ and ‘disposable.’”
Guerra called for governments to introduce “ethical and economic corrective measures,” because “the market is blind” to social needs.
Shifter said Latin America’s economic boom has created a window of opportunity for the region, and countries should take advantage of it by implementing stronger tax collection policies, so they can invest in social programs, and judicial reform to make access to justice more equitable.
Special emphasis should be placed on educational reform, which experts say is “the best way, in the long run, to reduce the inequality,” Shifter noted.
There are “a lot of pretty impressive achievements in the region,” he said. “Inflation is low in most places and poverty levels are coming down. All of that is good, but these tremendous inequities could derail those achievements.”