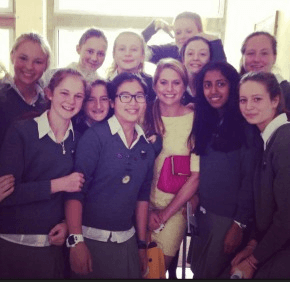 By Emma Welcher
ewelcher@catholicreview.org
While originally planning to stay abroad just one year after college graduation, St. Mary’s High School graduate Kara Bowman couldn’t get enough of England – and lacrosse.
Bowman first traveled to England in 2005 while participating in the Crossover Tour, an exchange program where Anne Arundel County youth lacrosse players connect with youth players from Stockport, England, and travel overseas alternating years to play lacrosse abroad.
The Arnold resident continued to play lacrosse throughout her years at St. Mary’s High School, Annapolis, which prepared her to compete in Division 1 women’s lacrosse while studying history at George Mason University. Bowman excelled both as a midfielder on the field and as a leader on the sidelines for the Mason Patriots. By her senior year she had established herself as a role model for other players, starting all 17 games and motivating her teammates as one of three team captains.
When Bowman graduated college in 2012 with a bachelor of art in history, she found herself venturing to England for lacrosse once again.
This time she was coaching middle and high school girls at the Cheltenham Ladies’ College, one of the top five academic schools in the United Kingdom.
The 23-year-old had “an incredible opportunity to travel” on her weekends and breaks, visiting a variety of cities including Nice and Rome. “Vatican City was amazing, and St. Peter’s Basilica was truly an overwhelming experience,” Bowman said in an email interview regarding her experiences in England. While she enjoyed exploring many different countries in Europe, southwest England became her home, an area she believes “is one of the most beautiful parts of the country.”
By the time Bowman’s planned departure date arrived, she had discovered a way to stay abroad and continue her education and passion of coaching.
“I originally planned to spend a year in England and then return home to attend law school,” Bowman said. “However, while I was abroad I was able to take a step back and really think about what exactly it was I wanted to do.”
She realized that she did still want to go back to school but was now interested in studying international relations. While researching various graduate programs, Bowman came across a “brilliant possibility” at the University of Exeter to coach the women’s lacrosse team while earning her master’s degree. “To go to a reputable university, have my master’s paid for while I am paid to coach is a once in a lifetime opportunity,” Bowman told The Capital newspaper.
Also see:
John Carroll grad doesn’t let limited eyesight hold her back
Inside Sports: St. Mary’s lacrosse legacy spans generations
PrevNext